Home » Mlore Today » Will not stop fighting for the poor come what may,declares Poojary 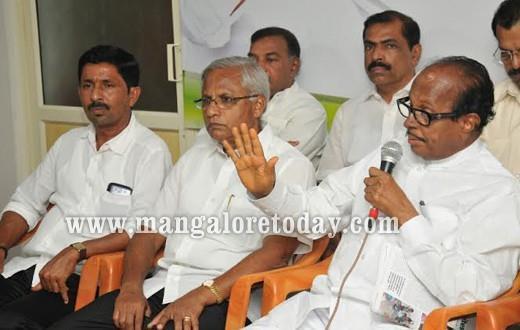 Image from Post Regarding Will not stop fighting for the poor come what may,declares Poojary

Will not stop fighting for the poor come what may,declares Poojary

Mangalore, April 01, 2014: Senior Congress leader and party candidate from Dakshina Kannada Lok Sabha constituency, B Janardhana Poojary has declared that he will not speaking in favour of the poor come what may.

Addressing press persons at the Party’s Election Office in the city on April 1, Tuesday, Poojari said he was a man who would not hesitate to even go to prison for the cause of the poor. Poojari was critical of the BJP for filing a case against him for speaking in favour of the poor, for assuring that the Self Assessment Property Tax would not be increased and also for promising to fight for reservation for the poor among GSBs and Brahmins.

“Is it a crime to fight for the poor and ensure better amenities to them?” Poojary questioned and added he would not fear and go ahead as per his conscience and work for the poor even in the future as in the past.

Stating that the speeches BJP PM candidate Narendra Modi was only   a bundle of lies, Poojary said din reality there was no development in Gujarat.

“There is no respect or recognition for seniors like LK Advani and Sushma Swaraj in the BJP.   Party men themselves are stating that Modi is adopting a dictatorial policy. People will give a befitting reply to this” Poojary said.