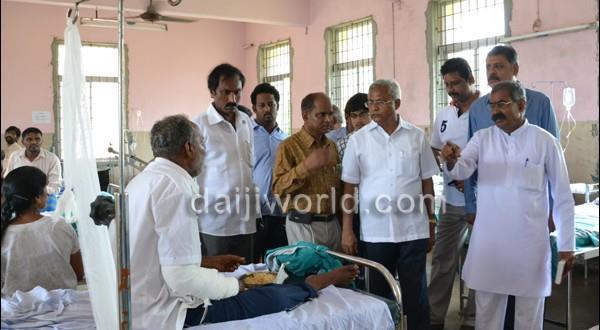 He made a note of the existing problems and checked with the officials as to finding immediate solutions to the problems on a priority basis. After the visit, he had a general discussion session with the staff and the higher officials and directed them to take stringent steps for the problems to be solved at the earliest.

Addressing the media, Lobo said that Wenlock hospital is a joint venture with KMC hospital, hence, there are no problems with regard to doctors. “But the major problem faced here is the shortage of nurses. ‘Group D’ employees are also a little lesser in numbers than required. The number of patients in the hospital is high, but the nurses are few. There is need for 13 nursing superintendents, but at present there are only 7. The ICU needs more beds, but due to shortage of nurses and staff, more of beds cannot be implemented,” he said.

“Oxygen facility, ventilators, and general infrastructure needs to be focused on. Minor OT has been lying unused for 10-15 years. Hence, it needs to be rebuilt. Modern equipment is the need of the hour for the operation theatres. X-ray machines are to be purchased for the orthopaedic department. Infosys has given a good building for the child care wing; hence, it has been maintained well and is running well. Radiology unit needs to be introduced for advanced treatment. Artificial limb manufacturing unit and burn centers have been well maintained,” added Lobo.

“Overall, good treatment has been given to the patients. Thus, people from Shimoga, Chikmagalur, Kerala, and other places have been visiting in large numbers. The total number of inpatients is more than 600 and out patients are nearly 700,” he added.

Lobo further directed the officials to maintain the surroundings, infrastructure, and the premises clean and in good condition.