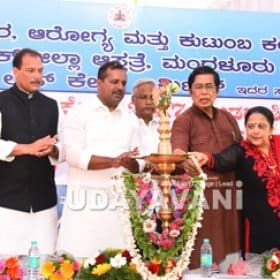 Image from Post Regarding Wenlock gets 24*7 Medical Centre, hearse van

Mangaluru : India has got a great potential to develop vaccinations. In this regard, our country has a history dating back to millenniums where in Sanjeevani, the magical plant was used to give a new lease of life to Lord Ram’s brother Lakshman, said Member of Rajya Sabha Oscar Fernandes after laying the foundation stone for Jana Sanjeevani 24*7 Generic Medical Centre at Wenlock Hospital on Saturday, March 7.

The medical centre will be built under the joint aegis of Dakshina Kannada (DK) District administration, DK Zilla Panchayat, Health and Family Welfare Department Govt of Karnataka and Wenlock Hospital.

Fernandes informed that tests were being conducted to generate artificial blood as substitute to human blood transfusion adding that India would be the first country to generate artificial blood within the next four years. He meanwhile, lauded the state government for various initiatives undertaken especially in the health sector.
Speaking on the occasion, State Heath and Family Welfare Minister U T Khader said that the 24*7 Generic Medical Centre will provide medicines at rates 10-20 per cent cheaper than the Maximum Retail Price (MRP). “The attendants of the patients need not go out of the hospital compound for medicines as the state government is functioning on the need basis rather than budget basis. Hence, medicines will be in ample supply at the medical centre here,” he said. Khader added that fee on facilities such as CT Scan and pathology among others will be fixed at very feasible rates shortly.

Public in the state can henceforth admit the accident victims to the hospital without any hesitancy as treatment for the first 48 hours and medications amounting upto Rs 20,000 will be born the government, Khader informed. This is the first of its kind initiative in the country, according to the Minister.

In another first of its kind initiative, Khader launched the hearse van service at Wenlock. The primary objective of the vehicle is to transport corpse free of cost. The facility at the hospital is donated by the U T Fareed Foundation. “If successful, the facility will be introduced throughout the state, first at the district level and then at taluk level,” Khader assured.