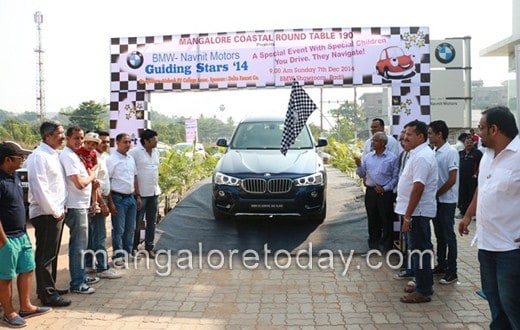 Mangaluru, Dec 9, 2014: “BMW-Navnit Motors Guiding Stars 2014”, a special treasure hunt endorsed the fact ‘I don’t see, but I can lead; I don’t speak, but I can guide’ in visually challenged children from the Roman and Catherine School for the Blind and SDM Mangala Jyothi School of Integrated Learning. BMW Navnit Motors, Mangaluru, in association with Mangalore Coastal Round table 190, had organised the programme to mark “world disability day”.

Mangalore South MLA J R Lobo flagged off the event at the BMW showroom in Padil. Speaking on the occasion, he said that the MLA development fund of Rs 40 lakh has been budgeted for 17 schools and invited the Round Table to assist both in finance and execution of projects that were of immediate value.

Treasure hunt : Route maps for the treasure hunt was made available only in Braille script. Each team could progress only after the driver and visually challenged youngater coordinated well enough to decipher the clues. In addition to this, the participants were surprised at certain points in the treasure hunt, to see speech and hearing challenged children enacting a certain personality or object. The challenge then turned out to be one of communicating through a signs in order to decipher the clue.

The end point also had a lot of excitement with a voluntary musicians group (employees from the Mangalore office of IT giant Infosys Ltd) playing melodies that many from the gathering including the visually challenged children chimed in.