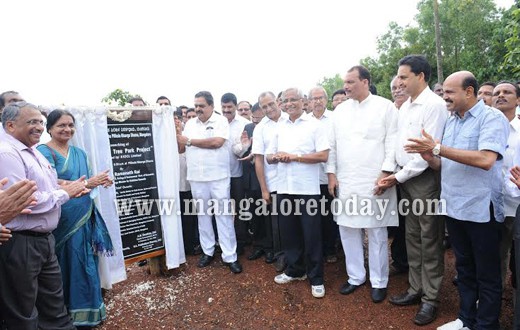 Image from Post Regarding Urban eco-park and auditorium at Pilikula

Urban eco-park and auditorium at Pilikula

The park which aims at awareness among people about various environmental issues, will comprise of a wide variety of trees and vegetation  to enhance the green cover .

Briefing about the project, an official from KSPCB said that urban tree park is a broad concept, where apart from planting saplings, demonstrations and exhibition of models on solid waste management, recycling, sewage treatment and water conservation will be made to create awareness among the visitors. Rare and endangered plant species will be grown in an arboretum inside the park.

There are plans to demonstrate the methodology of pollution control in industries and talks are held with some of the industries in Mangalore to seek their assistance. Ten acre land has been reserved for developing the eco park. In additional, the project comprises of constructing a 100 seat auditorium which could be used for organising workshops and programmes on environment conservation, the official said.

Speaking on some of the ambitious projects, MLA J R Lobo said an urban ’haat’ project has been completed and is ready for inauguration. The work on Regional Science Centre too is near completion and will be ready by September. The 3D planetarium project can be completed in another year. The project proposal on Janapada Loka and artisan village is pending before the government, he said.

Kudremukh tree park  :  In order to boost greenery in the city, a tree park will come up in a sprawling 15 acre land at Dr Shivaram Karanth Pilikula Nisargadhama.The project is funded by Kuduremukh Iron Ore Company Ltd (KIOCL) under its CSR initiative.

The KIOCL has sanctioned Rs 52 lakh for the project and it has been planned to grow 7,500 trees belonging to 50 rare and endangered species of Western Ghats. In the first phase 2,500 saplings will be planted.  Some of the tree species to be grown are wild jack, rosewood, dhoop, nutmeg, wild nutmeg, Indian laurel, jamun and so on. When the park is fully developed it will have good resting place and walking path. All the plants will labelled and eco education boards will be installed for creating awareness.

The project is likely to be completed within three years and will be a boon to Mangalore and surroundings.