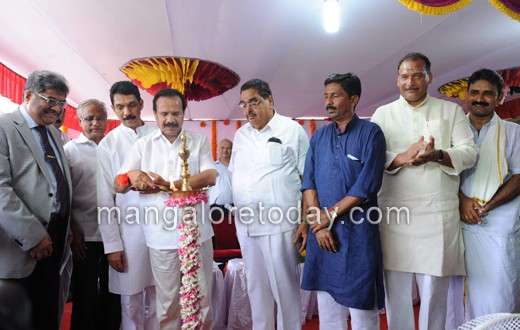 Mangalore, Aug 17, 2014 : Speaking after laying foundation for the RUB near Mangalore Railway Junction on August 16, Union Minister for Railways D V Sadananda Gowda  said that the long-pending demands of the people of Padil, Bajal is to be realised shortly.

Heavy traffic flows through the road and closure of the level crossing gates were causing inconvenience to the people. He promised that the road under bridge (RUB) in place of level crossing on Padil-Bajal road will be completed by February 2015.   The estimated cost of the RUB is Rs 5.61 crore. The project is being initiated on 50:50 cost sharing by the State government and the Railways. The State government had paid Rs 2.28 crore as its share. The MCC has paid Rs 51 lakh. The barrel length of the RUB is 23 metres.

Stating that the railways have given priority to safety, security and service, the minister said any proposal to the railways from Mangalore will be given priority. The Railway budget has earmarked Rs 1,400 crore to Karnataka.Gowda said that mechanised laundry will come up at Mangalore Central Railway Station. Two escalators will be installed shortly at the Central station.

MLA J R Lobo said that the Railways should give permission for laying a road from Kulshekar to Kannagudde. If the road is laid, then residents of Kannagudde, Melthota, Saripalla, Nooji, Kandevu, Sooryanagara, Niddel and Ummikhan will be benefited. Without road, no vehicles ply to these areas.  Railway over bridge should be constructed at Jeppu Mahakalipadpu road beteen Mangalore Central-Nethravathi bridge B cabin. A railway under pass should be constructed at Jeppu Kudupadi. The Railways must allow the MCC to develop kutcha road from Kulshekar to Kongur mutt. The road has been used by over 400 families.  He also urged the Minister to sanction a railway crossing at Balluru gudde The Bollurugudde is unapproachable without the crossing. In case of emergency, people have to carry patients to a distance of three kilometre to reach the main road. People residing at Kodaikal, Nooji and Kannagudde require an underpass near Shri Vaidyanatha Daivasthana to reach their residence.

District-in-Charge Minister Ramanath Rai said that when it comes to the railway projects in Dakshina Kannada, he will impress upon the government to release 50 per cent of the cost of the project.  Mayor Mahabala Marla, MP Nalin Kumar Kateel, MLCs Capt Ganesh Karnik, Ivan D’Souza, Zilla Panchayat President Asha Thimmappa Gowda, Southern Railway General Manager Rakesh Misra among others were present a midst a large local gathering.

The Minister said that a high-level committee will be formed to give suggestions on policy formation, resource mobilisation, cleanliness and FDI. Stating that the Cabinet has given approval from FDI in railways, Gowda said that the government has to chalk out a policy for the FDI in railways. The FDI will be only for infrastructure development and will not enter into the operating system.

Bio toilets :  The rail track has traditionally been open for defecation causing a very hazardous situation particularly at rly stations. The conventional toilets on trains allow discharge of excreta on the tracks. Hence, to check it, the railways will install 25,000 bio-toilets in coaches during the year.  The bio-toilets ensure that human waste does not fall on the track. Human waste discharged into the toilets is acted upon by anaerobic bacteria that convert the waste mainly into water and small amount of gases.

To improve quality of food served, the government has initiated third party audit of caterers. In the last one week, penalty of Rs 1 lakh each was slapped on 11 caterers for poor quality of food, he said. The Indian Railways plans to go for paper-less operation in the next five years. The process of digitisation will be completed in the next five years. The Railways will introduce biometric attendance system shortly.

To a query on Railway University, Gowda said that with an aim of providing railway-oriented education, the government is considering setting up of a Railway University for both technical and non technical subjects. “We have already written to the HRD ministry seeking guidelines for the formation of an university. The proposal will get a final touch by December.

World class station :  On world class station in Mangalore, he said that KITCO Ltd has prepared a project report on developing Mangalore Central Railway Station as worldclass station, at an estimated cost of Rs 215 crore. It will be developed on PPP mode. The railway staff have been made to learn regional languages to communicate with the people. The language classes will be held twice a week in all the stations across the country.

Separate M’lore division :  To a query on Mangalore division, Union Minister Sadananda Gowda said that for now a division like atmosphere will be created in Mangalore, to ensure that no inconvenience is caused to the citizens. Solution will be found for the problems faced by the people in this part of the region and all matters will be looked into.

Slogans for M’lore Divn :  Demanding the creation of aseparate Railway division for Mangalore, Paschima Karavali Railway Yatri Abhivridhi Samith President Hanumantha Kamath shouted slogans against Union Minister for Railways D V Sadananda Gowda at the foundation ceremony.  Though he had planned to waive black flag at the Minister, his efforts went in vain as the police took hold of the flag. The feeling is that  the new divn may not happen soon.