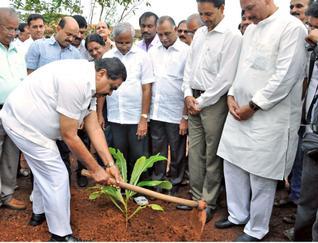 From the endangered Artocarpus hirsutus (Jungle Jack or Hebbalasu in Kannada) to the endemic Poeciloneuron Indicum ( Balaga in Kannada), a repository of more than 7,500 saplings of trees found in the Western Ghat region was launched at Pilikula on the outskirts of the city on Monday.

The “Kudremukh Tree Park”, sponsored by the pubic sector KIOCL Ltd., aims to conserve rare and threatened species of plants of the tropical forests surrounding the port city. The 15-acre park will eventually house more than 50 rare, threatened and endemic species.

The three-year project — from 2014 to 2016 — is being done with a budget of Rs. 52 lakh under KIOCL’s Corporate Social Responsibility (CSR) scheme, said Malay Chatterjee, chairman and managing director of KIOCL. Within the next one year, 2,500 saplings will be planted and later expanded, said officials of the Dr. Shivarama Karantha Pilikula Nisargadhama.

“When the park is fully developed it will have good resting places and pathways where eco-walks can be conducted for students and researchers,” said Mr. Chatterjee. The trees will be labelled and will be a part of the eco-education at the park, he said.

In a briefing for B. Ramanath Rai, Minister for Forests, Ecology and Environment, J.R. Lobo, MLA and former executive director of the biological park, said the State government’s funding was crucial to execute the ambitious plans at the park. “The State government has asked us to look at private funding for the Rs. 15-crore oceanarium to preserve fish species. If the State government can provide 75 per cent of the funding, then Pilikula can raise the rest of the amount through loans,” said Mr. Lobo.