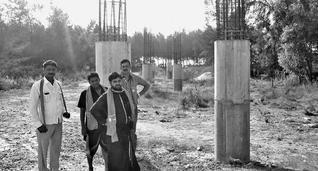 Image from Post Regarding Tourism, a tardy work in progress

Tourism, a tardy work in progress

The Department of Tourism has only these concrete pillars to show for the hanging bridge project launched three years ago at Tannirbhavi.

The Department of Tourism has only these concrete pillars to show for the hanging bridge project launched three years ago at Tannirbhavi.

The tardy progress of projects undertaken to promote tourism in the district came to the fore at an official meeting here on Tuesday. The case in point was the work of laying a cable suspension bridge to Tannirbhavi beach — a dream project of the former MLA N. Yogish Bhat — which was allotted in January 2010. Nothing happened for three years. The work only started in January 2013 and so far only a few foundation pillars have been raised.

MLA J.R. Lobo and Deputy Commissioner A.B. Ibrahim criticised the failure of the department to expedite the projects. The two were participating in the District level Tourism Development Committee meeting which is being held after a gap of several years.Intervening in a presentation being made by Assistant Director of Tourism Jitendranath, Mr. Ibrahim sought to know the progress made in each of the 14 ongoing projects, including the Rs. 12 crore cable suspension bridge. Neither Mr. Jitendranath nor Kalbhavi Rajendra Rao, the Director of Dakshina Kannada Nirmithi Kendra, which is implementing the cable suspension work, were in a position to explain the delay in commencing the work. Mr. Rao said he had asked the construction agency to stop the work. Mr. Jitendranath and Mr. Rao shifted responsibility on each other for slow progress. “The department is not serious about the project,” said Mr. Ibrahim.Mr. Lobo said the PWD and the Tourism Department were not interested in going ahead with the project. “I have raised this before the Tourism Minister (R.V. Deshpande). He has assured me of resolving the issue,” he said.

Mr. Ibrahim and Mr. Lobo were critical of the poor progress with regard to construction of a tourist reception centre and other facilities at the Kadri Manjunatha, Kukke Subramanya and Kateel Durgaparameshwari temples at an estimated cost of Rs. 1 crore each. All these works started in 2009.

He directed Tourism Department Assistant Director Jitenadranath to send a proposal for speeding up the process of issuance of certificates. The department can issue provisional certificates within a period of 15 days, he said.