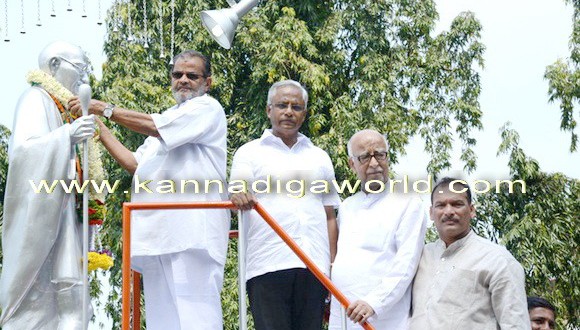 Image from Post Regarding The Congress activists exchange words in Congress sevadala Program in front of Gandhi’s Statue.

Mangalore, October 2: The Congress sevadala who had organised a tribute to the angel of peace – Mahatma Gandhi, had exchanged words in front of Gandhi’s statue and broke peace. This bizarre incident occurred on the premises of the city’s town hall on Thursday, October 2nd.
It was the time of garlanding to The Gandhi statue which is situated in front of the town hall in the city. MLA J.R.Lobo, MLC Ivon D’Souza, acting President of the district Congress party Ibrahim Kodijal, along with the activists had gathered. After garlanding the Statue of Gandhiji, it was the occasion of submitting tribute to Gandhi by speech. Ibrahim Kodijal was given his chance to speak.
At this instant; Ibrahim Kodijal had delivered a speech quoting the Mahatma Gandhi’s ideals, discipline and other matters, and gave a call to the congress activists to adopt it. Some of congress party members were aggravated by this. There was a strong reason behind this.
It is said that chief minister Ibrahim had been to the airport on Wednesday to welcome Siddaramaiah when he arrived at the airport, he had not got pass to enter inside. The MLA J.R.Lobo had gone to welcome the Chief Minister. Ibrahim, who was acting chairman of the Congress, had not received the pass to enter into the airport. Especially in the presence of Chief Minister Siddaramaiah he had charged the legislators, it is said.
It is said, the same Ibrahim Kodijal had forgotten discipline and spoke on Wednesday, the next day, when he preached the lesson of discipline to Congress activists, they had queried him that what is the morality in preaching discipline when you yourself to have forgotten the discipline and behaved in undisciplined manner at the airport yesterday.
This had aroused rivalry between two teams, which went to the extent of knocking each other and others interfered to calm them. The congress activists who had arrived to pay a patronage to Gandhiji an angel of peace fought in front of Gandhi statue had freely entertained others, it was said.
However, it can be assessed from this incident that, those who preach discipline have to follow at least some discipline, not only in speech, but in real life too….