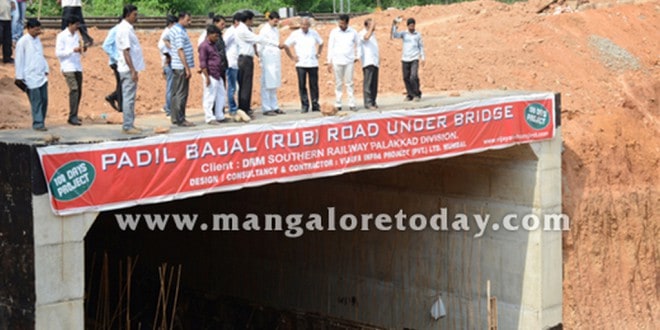 Mangaluru, May 04, 2015: Dakshina Kannada MP Nalin Kumar Kateel and Mangaluru South MLA JR Lobo along with officials and other elected representatives on May 4, Monday inspected the Padil-Bajal under bridge works in the backdrop of a problem that has cropped up owing to the overflowing of the drains parallel to the road.

Infrastructure Development Foundation’s Dharmaraj who was present said the crux of the problem lies in the drains which run parallel to the underpass and which have water throughout the year. The solution to the problem lies in raising the level of the road by at least one meter.

Speaking after inspecting the project area, MP Nalin Kumar Kateel, said the project has a technical glitch and requires the shifting of a pipeline to solve the problem. He said the authorities have been directed to take up remedial measures at the earliest. He even informed that the works on the Baikampady, BC Road and Padil under bridges will be over by May end. He said land acquisition issue has impeded the Pumpwell fly over project and added he has asked the MLA to look into the issue. The BC Road-Maani work will be completed before the onset of monsoon, Nalin informed and said a sum of Rs 7 crore has been sanctioned for the project.

MLA JR Lobo informed that the railway officials have also been asked to look into the Padil under bridge problem. A meeting will also be held under the presidentship of the MP, he informed.