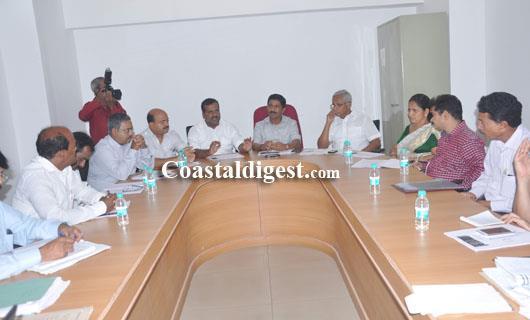 Mangalore, May 10: Minister for Health and Family Welfare U T Khader has directed the health officials to Take preventive measures to check the outbreak of communicable diseases in the Mangalore City Corporation limits.

Chairing a meeting here on Saturday, he said that the cleanliness drive should be taken up on war footing basis as monsoon is fast approaching. There is a need to check the outbreak of malaria, dengue and Chikungunya during monsoon.

The Minister said that the MCC has the power to take action against those shop keepers who do not maintain their surroundings clean. The MCC can warn them if they commit the mistake for the first time. However, strict action can be initiated against the habitual offenders, he added.

Health and Family Welfare Principal Secretary N Sivasailam said that private clinics should inform district health and family welfare department and the MCC on the number of communicable diseases reported on a daily basis. If they fail to report on daily basis, then action can be initiated against them.  Any delay of 48 hours in informing the DHO can be considered seriously by the authorities.

He said that the health officials should ensure that water do not stagnate in under construction buildings for more than 36 hours. The water left for curing should be changed after 36 hours.

Majority of the communicable diseases outbreak in those areas where water has remained stagnant giving scope for breeding of mosquitoes. The health and town planning officials should work in coordination and ensure that there was no Hstagnant water. Destroying the source of breeding is the only solution to check communicable diseases.

The Principal Secretary said that platelets should be provided to poor patients suffering from dengue free of cost.

The health official said that a total of 4,714 malaria cases were reported in the MCC limits during 2013. The total number tested positive for malaria from January to April this year is 2097.

Taking a dig at the cleanliness aspect in Mangalore city, MLA J R Lobo has said that there is no hygiene in the city. A lot of work was needed to be done here. Storm water drains have been converted into sewage drains. The pending work under the Kudcemp project should be completed at the earliest.

The markets in the MCC limits are in deplorable condition. “I had asked the MCC officials to construct a toilet at Jeppu market. However, no action has been initiated so far. Cleanliness is not maintained in Kankanady market. The MCC does not have a permanent health officer. We need a health officer to implement action plan on health and cleanliness.” MLA Mohiuddin Bava said that the officials are neglecting Surathkal area. The work on storm water drains have not been taken up so far.

National Urban Health Mission (NUHM) District Project Management Officer Dr Rathnakar said that under NUHM, five health kiosks will come up at Jyothinagara, Kudroli, Meenakaliya, Pachanady and Kuthkorigudda in the MCC limits. Kiosks would be functioning during the office working hours. Mobile clinics would visit all kiosks once a week.

At the same time, Mahila Arogya Sangha will be constituted. The Sangha members will visit 50 to 100 houses in slum areas to create health education. “Once, the guidelines on the formation of Sangha is finalised, we will start the programme,” he added.

Mayor Mahabala Marla said that the government should release additional funds to eradicate communicable diseases in the Mangalore City Corporation limits. “We need to chalk out a programme by involving the citizens in the drive.”