Home » Website » Manipal World News » Society should be united in the name of Religion: Siddharamaiah 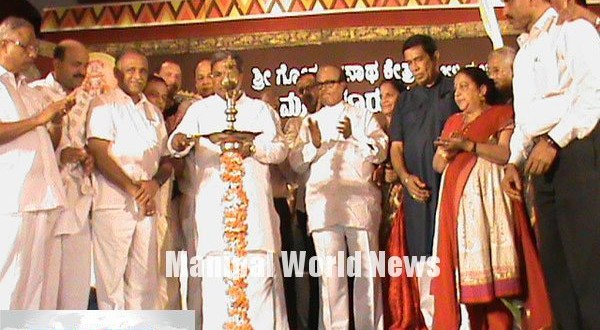 Image from Post Regarding Society should be united in the name of Religion: Siddharamaiah

Society should be united in the name of Religion: Siddharamaiah

Mangalore Sep 29: The chief minister of Karnataka Siddharamaiah said that some people have been using and religion and god to  divide the society. During this Dasara Let the god enlighten their mind.

He was addressing the gathered after officially inaugurating the Mangalore Dasara in the Kudroli Temple on 27 September, Saturday.

“We should pray for others when we pray to God. I have prayed for the prosperity in the state. Let us not be selfish in front of the God rather pray for each other.”

Replying to Former Union minister Janardhan Poojary’s suggestion the CM said that in the temples those are taken care by the state, female priests will introduced on Pilot basis.

Earlier the Former Union minister who also presided over the ceremony has suggested to the CM that as it was introduced in the Kudroli Temple the CM also should exhibit the respect that he has for women by appointing female priests in the state owned temples.

The CM was later presented the idol of Kadegolu Krishna on behalf of the temple development committee.

In prior to the inaugural ceremony the CM savoured the bird eye view of the temple premises and offered prayers to idols of Navadurga and Sharada installed as part of Mangalore Dasara/Navarathri festivities and to the presiding deity at Kudroli Gokananatha Temple.