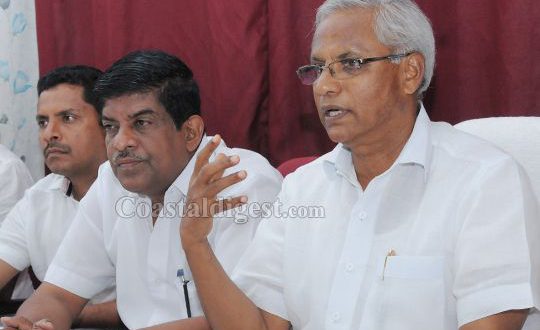 Mangaluru, Jun 3: After failing to make it to the first two rounds of Smart City lists, the Mangaluru City Corporation is now likely to submit a modified proposal with more focus on fishing activities along with overall development of the city.

Mangaluru City South MLA J R Lobo told media persons on Friday that the development of Old Port and modernisation of fishing sector would find a place in the proposal for the Smart City Project from MCC for the next phase plan.

Mr Lobo said that the history associated with the Mandakki Bhatti (puffed rice mill) Colony in Davangere and Cantonment Area in Belagavi helped the cities to find a place in the first phase of the Smart City Project.
“We have decided to include development of Old Port and fishing sector in the proposal and promote it as our USP,” he added.

Lobo said the Smart City Project will catapult cities into the technology-based future.
“The city’s tryst with Old Port and fishing sector dates back to several centuries. But in more modern times, it established itself as a famous trade and employment. Given its vast employment opportunities and trade activities, Lakshadweep was wholly depending on Mangaluru for its all requirements. However, now the trade between Lakshadweep and Old Port in Mangaluru has declined drastically. In the past, Mangaluru traders were exporting spices and coffee to Middle Eastern Countries, Africa and Mauritius through Old Port. The Old Port has a long history of being a commercial centre. There is a need to revive the past glory of the Old Port and fishing activities through Smart City Project,” he stated.

He said Mangaluru did not figure the first list of the Smart City Project as it failed to propose development based on a sector in the proposal. The revival of the Old Port and modernisation of fishing sector will also promote tourism in the region, he added.

Lobo said the long-pending demand for a dedicated jetty for tourism and trade between Mangalore and Lakshadweep will soon be fulfilled with the state government and Lakshwadeep administration signing a memorandum of understanding. This will revive the trade relations with Mangaluru city. The jetty, to be constructed on the northern side of the Old Port in Bunder, will facilitate both tourists and traders who will export commodities to the island Union territory. The blue print of the project is ready. Lakshadweep administration will invest Rs 70 crore for the project. Apart from this, the Lakshadweep administration will take up dredging by six metre depth from estuary to the northern side of the Old Port, which in turn will help the fishermen in anchoring their boats in the Wharf, he noted.