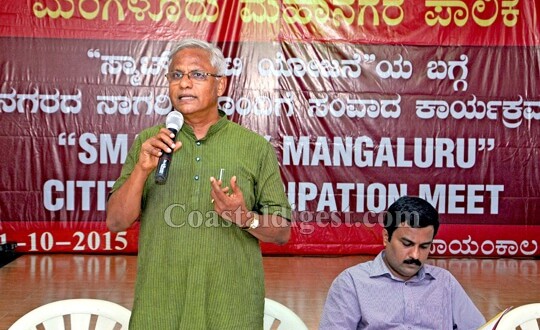 Mangaluru, Oct 12: Monorail, modern and wider roads including a ring road, flyovers and Wi-Fi hot spots were some of the demands raised by different people at a meet organised by Mangaluru City Corporation seeking suggestions for inclusion in the project report to be submitted to the Union government’s Smart City project.

The citizen’s participation meet was held at an auditorium opposite Kadri Park in the city on Sunday in the presence of Mangaluru South MLA JR Lobo and Mangaluru City Corporation Commissioner HN Gopalakrishna. The Union government will select the first 20 cities where the project will be implemented this year.

Suggestions also came to provide alternate facilities to street vendors, to develop parks in vacant government lands, to develop parking complexes in the city, to take measures to get IT companies into the city, to build smart traffic control system, to impose smart city cess, to implement a more effective waste management system, formation of a separate team to look into infrastructure needs of the city and so on.

Mr Lobo felt for a need to develop a system through advanced technology to effectively take various services to people. There is also a need of a complaint management system for the fast reddressal of public grievances, he said.

He said that Rs 1000 crore to be released during the first phase of smart city project will be used as a seed money to develop the basic facilities to in turn attract investments for further projects.

Rajaram Shetty, from M.V. Shetty Institute of Technology, Moodbidri, said that the city corporation should have a separate cell that will work on problems facing the city development.

“For instance, the problems following rainfall should be addressed during the rainy season and not after that, ” he said.

The corporation should grant permission for constructing multi-storey building only after studying the need of accommodation in the area where it was being built, he said.

George Pais, who represented plastic industries in the city, expressed the need to develop a satellite town. “The satellite town can come up at Ganjimath,” he said, adding that the corporation should make arrangements to get power for the city from the Udupi Power Corporation Limited’s plant in Padubidri.

Expressing fears among people visiting the city regarding “moral policing” (also known as immoral rowdyism), Manohar Shetty, from the State Bank of India, said that action need to be taken to prevent such incidents.

Shyam Bhat expressed the need for Wi-Fi hotspots in the city for easy internet access to students. Ramesh Shetty from Attavar said that roads in the city needed to be widened and impetus should be given for measures that facilitate the smooth movement of traffic.