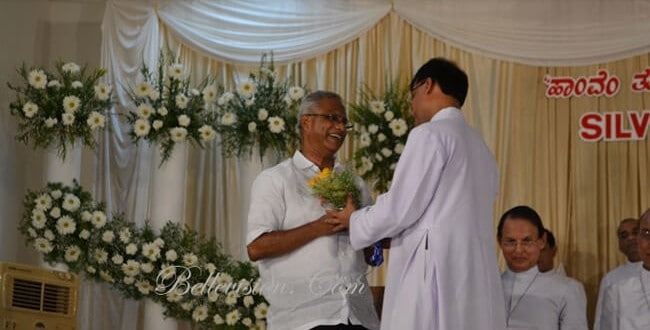 Image from post regarding Silver Jubilee of Priesthood of Fr. Denis D’Sa observed with solemn Eucharistic celebration and gra

Udupi/Kalyanpur, 28 Jun 2015: The Silver Jubilee of priesthood of Rev. Fr. Denis D’Sa, PRO of Udupi Diocese and Parish priest of St. Antony’s Church, Kuntalnagar was observed at his native parish Mount Rosary Church, Santekatte-Kalyanpur by his family, relatives, friends and well-wishers on Sunday, 28 June 2015 with solemn Eucharistic celebration at 10.30 am with Fr. Denis as the chief celebrant along with three Bishops-Most Rev. Dr. Gerald Isaac Lobo of Udupi Diocese, Most Rev. Dr. Henry D’Souza of Bellary Diocese and Most Rev. Dr. Peter Machado of Belagavi Diocese. Sixty priests from both Udupi and Mangalore Diocese also participated in the Eucharistic celebration.

Rev. Fr. Joseph Martis, Rector of St. Joseph’s Seminary, Mangalore delivered meaningful homily appropriate for the occasion. He said that throughout the Biblical history, God chose week and humble persons as His messengers in the form of prophets who became bold and vocal in doing God’s work. Similarly, Jesus chose 12 humble and rustic persons as his apostles who became the founders of the church. In the same way God also chose Fr. Denis to priestly vocation and during the past twenty five years He had endowed him with various talents and abilities to carry on His work and Fr. Denis has proved himself as worthy of his priestly vocation.

Fr. Joseph further said that wherever Fr. Denis went and whatever post he held, he was instrumental in creating enthusiasm and liveliness among the people whom he came in contact. Secondly, with happy disposition, Fr. Denis endeavoured to spread happiness among the people through various ways and endeared to them with accessibility, communication and empathy. Thirdly, Fr. Denis acted as an instrument of God in spreading good news through his words and actions. In conclusion, highlighting the strong faith that is being manifested by Fr. Denis in whatever he did in the service of God and the church, Fr. Joseph quoting Blessed Mother Theresa said, “God has called us not to be successful but to be faithful.”

The felicitation programme began with the cutting of the jubilee cake by Fr. Denis along with his mother. Meanwhile, Vinayakumar Sorake, Urban Development Minister and In-charge Minister of Udupi District in the Karnataka Government paid a brief visit and felicitated Fr. Denis by offering him a flower bouquet.

Raising the toast on this occasion, Rev. Fr. Clement Mascarenhas, one of the close friends of Fr. Denis, briefly narrated the family background and finer qualities of Fr. Denis. Born as the fifth child among five daughters-Precilla, Rosy, Clotilda, Dorothy and Lavina and two sons-Fr. Denis himself and Wilson, Fr. Denis joined St. Joseph’s Seminary, Mangalore and was ordained a priest on 14 May 1990 by late Rev. Dr. Basil D’Souza, the then Bishop of Mangalore. Thereafter, Fr. Denis served as the assistant parish priest at Udyavar, Bejai and Rosario Church in Mangalore where Most Rev. Dr. Peter Machado, present Bishop of Belagavi was the parish priest and Fr. Clement was the principal of Rosario High School. At the Rosario Church, Fr. Denis became well-known as a forceful and effective preacher who brought innovations in his sermons which were appreciated by the parishioners.

Later, Fr. Denis was appointed as the parish priest at the Narampady church where he proved his ability as an organizer and motivator. Thereafter, he was given charge of Sandesha as its Director during which a number of musicians and artists were trained in the institution. Fr. Denis made his mark as the Administrator of Fr. Muller’s Hospital Medical and Nursing Colleges and earned the goodwill of the Doctors, Professors, Students and patients and their family members.

When the new Udupi Diocese was formed, Fr. Denis opted for the new diocese and was appointed as the PRO of the diocese and parish priest of St. Antony Church, Kuntalnagar, the twin posts that he still holds with great responsibility.

Rev. Fr. Clement Mascarenhas highlighting the finer qualities of Fr. Denis said that, he has been known for his discipline, time management, oratory, communication skills, love of music and arts and also jokes. He summed up saying that Fr. Denis has been an accomplished priest with many talents and an asset to the Diocese of Udupi. With a poem in Konkani composed by him for the occasion of the Silver Jubilee, Fr. Clement concluded the toast.

The family members, beginning with his mother, Mrs. Mary D’Sa followed by his sisters and brother felicitated Fr. Denis with flower garlands.

In his felicitation message, Most Rev. Dr. Peter Machado, Bishop of Belagavi said that Fr. Denis has been the most colourful personality in the twin dioceses of Mangalore and Udupi and a bundle of talents. He made it a point to attend the Silver Jubilee function on the explicit invitation of Mrs. Mary D’Sa, mother of Fr. Denis as he could not say ‘no’ to a mother’s request.
Most Rev. Dr. Peter Machado honoured the five batch mates of Fr. Denis who have also completed 25 years of their priesthood. Fr. Denis on his turn honoured Bishop Peter Machado by offering him jasmine garland and a memento.

On behalf of the parishioners of Mount Rosary, Rev. Fr. Philip Neri Aranha along with the Vice President and Secretary of Parish pastoral Council felicitated Fr. Denis.

Delivering felicitation oration, Most Rev. Dr. Henry D’Souza, Bishop of Bellary said that Fr. Denis is the priest with unlimited capacity, multiple talents and ever energetic. He along with Roy Castelino, President of Konkani Sahitya Academy honoured Fr. Denis with shawl and flowers.

In his presidential address, the Bishop of Udupi Diocese, Most Rev. Dr. Gerald Isaac Lobo said that wherever Fr. Denis had gone, be as the assistant parish priest, parish priest, Director or Administrator or any other post during the last 25 years, he had added value to priesthood by his strong faith, dedication and selfless service. God has filled him with various gifts and he has been using these gifts and talents to spread the message of God and in the service of the church and the faithful. The Bishop greatly appreciated the service that is being rendered by Fr. Denis to the diocese as the PRO and the parish priest of Kuntalnagar.

Rev. Fr. Denis D’Sa, in his reply to the felicitation, expressed his gratitude to Almighty God, his parents, sisters and brother and everyone who made the celebration possible. In a lighter vain, Fr. Denis narrated certain ‘secrets’ of the family such as why his mother has been known as ‘Amma’, his role in the family as a disciplinarian and strict ‘priest uncle’, etc. Fr. Denis said that his late father, Salvadore D’Sa had been a person of discipline and strict follower of principles. Fr. Denis further said that though his father was not very keen that he should join the seminary, it was his mother who stood firmly behind him and encouraged him to join the seminary. He thanked his sisters and brother Wilson for organizing the Silver Jubilee function as their mother Mrs. Mary D’Sa who is 80 years old was very keen on the Silver Jubilee celebration of hers son’s priesthood. He appreciated the efforts taken by his youngest sister, Lavina in organizing the function.

Rev. Fr. Denis D’Sa further said that he could grow up with all the talents that were cited by the earlier speakers chiefly because of his priesthood by which he gained much. He pointed out that a number of doctors who were students in Fr. Muller’s Hospital Medical College while he was the Administrator made it a point to attend the Silver Jubilee function from places such as Chennai, Bangalore, Mysore and other places because of their affection and love towards him and said that love has no boundaries.

At this juncture, Fr. Denis remembered his benefactors, a family that was growing potatoes who used to keep aside a little amount from their earnings to sponsor his priestly training. Following that example, Fr. Denis said that his brother Wilson would be sponsoring two seminarians and a cheque to that effect was handed over to Bishop Henry D’Souza which in turn would be handed over to Bishop of Mangalore.