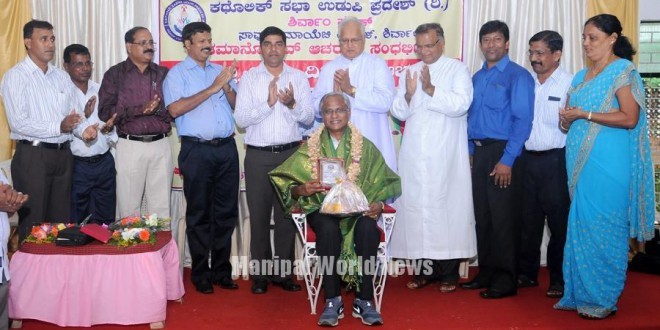 At 9.30 there was a mass fully participated by men of shirva church. In the mass Choir, offertory, liturgy were organised by Men. After the mass the men who present in the church went to the hall in procession with the band set under the leadership of parish priest Fr Stany Tauro, the chief Guest Mr. J.R Lobo, the MLA of Mangalore North and Mr. M.P Noronha Advocate and the Secreatry of Pastoral council of Manglore Diocese.The band set gave a new and dynamic  look to the whole procession and function.In the hall there was a stage program.

The function was started with a marvellous prayer by Sunil Cabral and party. The president of the catholic sabha Shirva unit welcomed the gathering. In the function the newly elected MLA Mr J.R Lobo was honoured .The newly elected Catholic male members were felicitated. The outstanding students were awarded with prizes. The senior most catholic male Mr. Felix Nazareth who was present in the function was also honoured. The chief guest were introduced to the function by Mr. Melwyn Dsouza and by Mr. William Machado. After that chief guest spoke a few words regarding the existence and importance of Men at home in the society and also in the church by giving suitable examples and also expressed that this type of Mens Day is celebrated for the first time in the history undivided Diocese. The chief guests wished every success for men in their endeavour. Joint Secretary Mr. Alphonso Fernandes gave a vote of thanks.

After the stage program  there was a entertainment program fully participated by Mr. Sunil Cabral, Mr. Wilson Dsouza and Mr. Lancy Corda. The whole function was ended by a tasty non veg lunch. All The men who gathered felt  very happy and enjoyed the whole function. This type of Men’s Day was celebrated by the Catholic Sabha  for the first time in the history of Diocese.