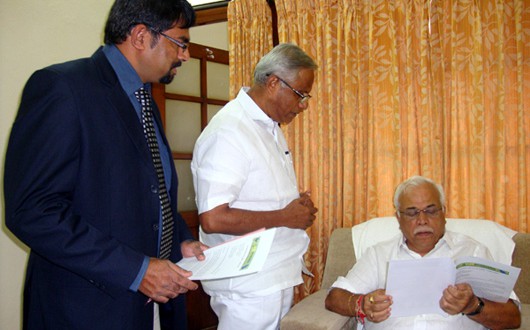 Mangalore, Sep 10: Karnataka NRI Forum, Jeddah, Saudi Arabia, has urged the Karnataka government to allow children of NRIs from states to take the common entrance test (CET) for admission to undergraduate professional courses in the State on the lines of people of Karnataka from outside the State.

According to KNRI Forum, Jeddah, there are around five million Indians working in the six GCC countries and around two million Indians working in Saudi Arabia alone. It has been proven time and again that nearly 80% of all Indians are engaged in blue collar and mediocre level jobs where the salaries are not very attractive compared to the present salary scale of government and private companies in India.

Now, with this mediocre income, when the children pass their XII standard, through Indian CBSE, Delhi, the children are not allowed to appear for the state sponsored CET tests, especially in Karnataka, not even the meritorious students. They are told that they should avail seats in professional colleges like medical and engineering under NRE quota by paying huge donations, which ranges from 75 lakhs to 1.5 crore, depending upon the college, course and the state they choose. “The economic condition of many Kannadiga NRIs, particularly working in the Gulf region is not so well as earlier, and many of them are managing hand to mouth existence. Many of them are not in a position to pay heavy capitation fee in private colleges,” the Forum said.

Kerala, Maharashtra and almost all northern states allow NRI children to appear for CET exams of their states.

President of Forum requested Mangalore MLA J R Lobo and higher education minister R V Deshpande to do all that is necessary to scrap the policy of excluding NRI students from Karnataka state CET exams and give them an equal opportunity together with local candidates to appear for CET. Let merit be the criterion for both local and NRI students and nothing else, he said.

Higher education minister R V Deshpande gave assurance of doing the needful. J R Lobo said that he will take necessary action for this cause and will be regularly in touch with the government of Karnataka for positive action.

Karnataka NRI Forum Jeddah has also requested all Karnataka associations of GCC and other nations to send such memorandum through their embassies.