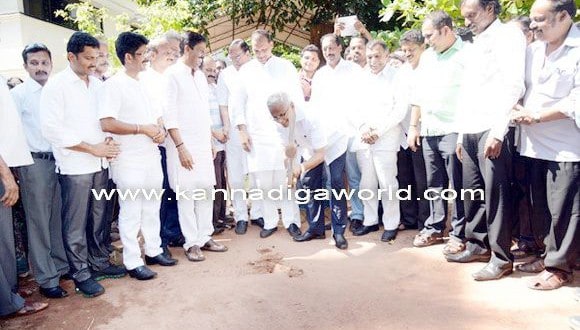 JR Lobo, post the inauguration addressed the gathering and said, “Sanyasi Gudde area is basically located in the heart of the city hence we will tackle all the difficulties and concretize this road. People complain that politicians know only to speak. We will do our duty and speak later.”

He also revealed that MLC Ivan D’Souza will be releasing Rs 5 lakhs for the construction work in the coming days.

Vinayaraj Area Corporator informed that the Rs 43 lakhs is granted for the construction of road is 43 lakhs and Rs 23 lakhs is sanctioned for drainage works.

Mayor Mahabala Maarla said that his first preference is to make the Mangaluru city a ‘Green City’. “There are many
works pending and we cannot implement all works instantaneously. It will take time and very soon all the work will be finished”.