Home » Manglorean » Safety of Students is our Priority – MLA Lobo 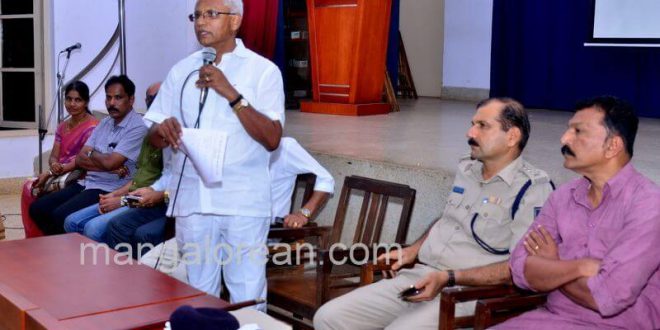 Safety of Students is our Priority – MLA Lobo

Mangaluru: After the Trasi, Kundapur incident which claimed 8 innocent lives, the district administration has got into action. An interaction between the Traffic Police, RTO, Education department, Mangalore City Corporation, auto drivers, van drivers, parents and school authorities in connection with the safety of school children was held at Roshni Nilaya, Valencia here on June 27.

During the interaction, auto drivers expressed their problems. Some auto drivers said that if they paint their autos yellow, they would not be able to take passengers and would face problems during holidays. Some also said that autos or vans are cheaper compared to buses and in some buses, students get overcrowded and conductors also charge more.

Some drivers also complained that the police are unnecessarily penalising them and stopping their vehicles when they drop students to school. “Sometimes the police make us wait for long, which creates problems for the students to reach school on time,” said one driver.

“In schools, monitoring committees should be formed and if these committees have already been formed, then they should be strengthened. The monitoring committee should collect the contact number, vehicle number, name of the driver and related information from them. This will help schools to take care of their students’ safety,” said social activist Sunil Kumar Bajal.

ACP (Traffic) Uday Nayak said that most of the accidents occur due to negligence and violation of traffic rules. “In Trasi also, there was a negligence and 8 innocent children lost their lives. Everybody has been expressing their problems but have failed to give a solution.”

He further said that it is the duty of every citizen to follow traffic rules and no one should compromise. “When there are any oncoming vehicles, one should be extra careful and alert. Reckless driving, over-speeding or negligence always leads to disaster. People are continuously violating traffic rules, but the police have not taken stringent action against the violators. The police have always created awareness among the people but the people are not serious about it. Those who drop school children in autos or vans should colour their vehicles yellow and in this regard, the government should take an initiative.” He urged the parents, auto drivers, van drivers and school authorities to co-operate with the police.

RTO S G Hegde speaking on the occasion said that the drivers who drop students to school in their vehicles should give importance to the safety of the children. “While dropping the students to school, drivers should strictly follow traffic rules. If the government provides bus facilities to students, it will really help the students to reach the school on time safely,” he added.

He further said that according to the law, private vehicles are not allowed to drop students to school. “If any driver is willing to take students on his vehicle, the vehicle should be painted yellow and there is no compromise in this matter.”

In response, Mayor Harinath said that even though roads have been widened everywhere in the city, people park their vehicles on the road and this causes a problem for the smooth flow of traffic. “In the morning, everyone is in a hurry to reach their respective destinations but if the roads are blocked they will reach the office, school or their workplace late. To avoid reaching late, drivers should not unnecessarily overtake other vehicles or violate traffic rules. The RTO should implement strict laws and not allow any vehicles to be parked on the roadside.”

The Mayor also said that any driver willing to drop students will have to paint his vehicle yellow and the government would give a 50% discount in tax. “Sometimes, these drivers start late and to reach their destination on time drive their vehicles at high speeds. Nowadays, people have very little patience. Most of them are in a hurry and overtake other vehicles, leading to roadblocks and accidents. In this regard, we need to change the school timings.”

He also urged auto drivers to limit the number of students in their autorickshaws. “We have seen auto drivers keep school bags on top of the auto. It is very difficult to navigate through the Kavoor-Bejai road as vehicles are parked on both the sides of the road. The Traffic police and RTO officials should look into it and solve such problems. Throughout the city, speed limits should be compulsorily followed. Everyone wants safety and we need to provide safety to our children.”

MLA J R Lobo said that everyone is talking only about their problems, but most of the problems are similar. “I cannot take any sides because my priority is the safety of children during school and it is my duty to work towards the safety of the children.”

Lobo urged the police officers not to penalize drivers when there are students in the vehicle. “Note down their number and send a notice or ask them to come to the station later, because if the students do not reach their schools or homes on time, their parents will panic. Every parent wants their child to be safe.”

He also said, “In parking matters, the traffic police should be strict because vehicles are being parked on the road and this disrupts the smooth flow of traffic. We need to bring awareness among the people about traffic rules.” Addressing the drivers, he said, “If you paint your vehicles, a 50% discount will be given, which will benefit the driver. During the holidays for two months, the drivers will be allowed to go on hire.” He also suggested the school authorities to provide school bus facilities to the students so that they can reach home safely, and urged them to fix a convenient school timing.