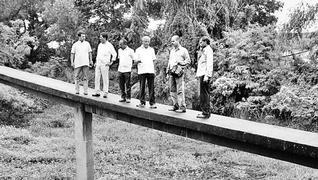 Mayor Mahabala Marla and Mangalore City South MLA J.R. Lobo on Thursday instructed the Horticulture Department officials to remove wild grass and weed in the Kadri Park within a week.

After inspecting the park, the Mayor said that he would come again after a week to see whether the instructions have been adhered to or not.

The Deputy Director of Horticulture Yogesh H.R. told them that except in a corner of the park, wild grass and weed have been removed and the Department had maintained the cleanliness of the park.

He said that the wild grass and weed have been removed from the walking path and other areas frequented by people. Mr. Yogesh said weed is seen because in the monsson wild grass grew very fast.

When Mr. Lobo instructed the officials to put manure to saplings in the park, the Deputy Director said that if manure was put in the rainy season it would get washed away in rains. Hence manure would be put once the rain stopped.

Later M. Lobo told presspersons that the government recently released Rs. 5 lakh for the maintenance of the park.

He said that Rs. 1.5 crore had been sought by the government to give the park a facelift. The government was yet to sanction the amount.

To a question, he said that the design of the music fountain proposed to be built in the old deer park (in front of the Kadri Park) had been revised.

The cost too had been revised from Rs. 2.5 crore earlier to Rs. 4.5 crore. The approval of the government for the revised design was awaited.

He said he would convene a meeting of officials and other stakeholders concerned shortly to discuss about development of the park.

A horticulture department official said that the toy train service from the Department of Women and Child Welfare in the park has come to a halt as the Southern Railway has said that as the train was old it should be replaced for safety reasons and the existing one should be auctioned.