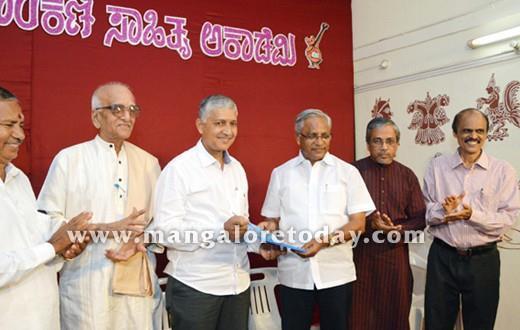 Mangalore, March 6, 2014: Roy Castelino who was recently appointed as the President of the Karnataka Konkani Sahitya Academy, assumed office at a ceremony held at the Academy office on March 6, Thursday in the presence of a host of dignitaries. Mangalore South MLA JR Lobo who was present as a chief guest, handed over the appointment letter to Castelino.

In his address, the new Academy President Roy Castelino promised to work for the overall development of Konkani language, literature and culture during his tenure. He also emphasised the need to study Konkani language in schools.

The Academy Registrar Devadas Pai elaborated on Roy Castelino’s contribution towards the promotion of Konkani language even while being a builder by profession.

MLA JR Lobo who also spoke said a language can progress when people prefer to speak in their language instead of other languages.