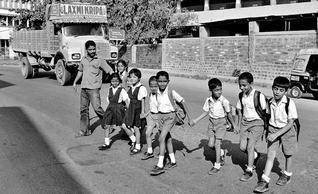 Image from Post Regarding Uploaded To ‘Roads have improved, but motorists still break rules’

Though statistics hide the magnitude of human suffering behind impassive numbers, it is still a concern that the number of people dying in road accidents are on the rise, said C.H. Pratap Reddy, Inspector-General of Police (Western Range), here on Tuesday.

Speaking at the inaugural of the 25th National Road Safety Week, Mr. Reddy said his division – which comprises districts of Dakshina Kannada (except Mangalore city commissionerate), Uttara Kannada, Chikmagalur and Udupi – recorded 797 deaths in 2013, which was up from 702 deaths in 2012.

He said the situation was so severe that higher officials now visit spots of the accident only if there are more than three deaths – a far cry from two decades ago, when it was imperative for the Deputy Superintendent of Police to visit the scene after every traffic accident.

“In the past 15 years, roads and standards of vehicles have improved. The highways are designed for speed… and yet, motorists continue to break rules, come in the wrong direction especially if there is a divider on the road. It isn’t possible to regulate the violations through a department. The citizens need to do their part as well,” he told the audience that was a mixture of autorickshaw drivers, bus owners and drivers and students.

Mangalore South MLA J.R. Lobo and chairman of Karnataka Bank Ltd Ananthakrishna reaffirmed that it was the responsibility of both the authorities and citizens to curb violations. “Citizens should follow rules even if traffic policemen are not there… while proper planning needs to be done before constructing roads and footpaths,” said Mr. Ananthakrishna.

The speeches were followed by songs by Traffic policeman Gajendra about the importance of road safety; while social work students from St. Aloysius College performed a well-received often-humorous play on the various common traffic violations and their disastrous consequences.

Organised by the district administration, transport and police departments, the week-long campaign will include intensified checking for drunken driving, street plays, and awareness rallies.