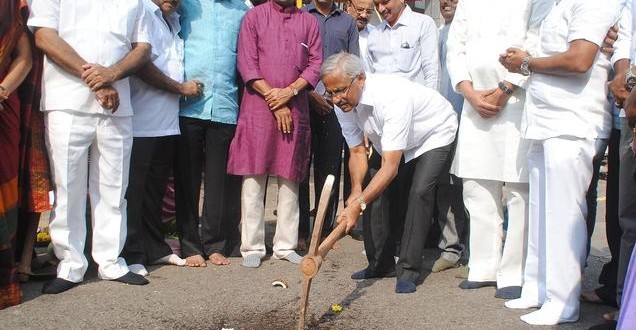 Road from Ambedkar Circle to Bunts Hostel to be upgraded

The busy road between Bunts Hostel Junction and Ambedkar Circle in the city will get a facelift as Mangalore City Corporation will upgrade the road as a four-lane concrete road within six months.

Mayor Mahabala Marla conducted the ‘ground breaking’ ceremony for the works on Tuesday.
The corporation will upgrade the 342-mt stretch between the circle and the junction at an estimated cost of Rs. 2.19 crore. The work will have to be completed within six months, an official of the corporation said on the occasion.

When upgraded, the stretch would have seven-mt wide carriageway (on which vehicles ply) on both the sides with a mt-wide central median. There would footpaths 1.5-mt wide on both the sides and below the footpath there would be stormwater drain and ducts, the official said.

The differences of opinion within the ruling Congress in the corporation council came out during the occasion as Ashok Kumar D.K., Chairman, Standing Committee for Town Planning and Improvement at the civic body, boycotted the “guddali pooja” as a flex put up at the site did not have his name and photograph. Mr. Kumar who arrived on the spot left the venue alleging that he had been sidelined.

The Leader of the Opposition in the council Premananda Shetty, from the BJP, speaking to presspersons, alleged that the corporation did not maintain protocol by not inviting the Member of Parliament Nalin Kumar Kateel for the “pooja”.

He said that the work was being taken up from the second instalment of Rs. 100 crore sanctioned to the corporation when B. S. Yeddyurappa was the Chief Minister. The corporation should have mentioned the name of Mr. Yeddyurappa in the flex, he added.
Ivan D’Souza, MLC, and J.R. Lobo, MLA, Mangalore City South, were present on the occasion.