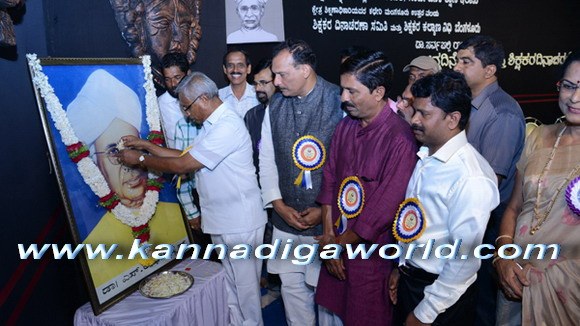 Mangalore, September 5: MLC Ivan D’Souza said that, “Teachers can play an important role in controlling communal clashes in cities. It would be better if the deputy commissioner calls teachers for emergency meetings in such situations along with the police and the politicians”.

He was addressing the gathering during the Teachers’ Day Celebration at Town Hall on Friday September 5th hosted by DK zilla panchayat and education department.

Addressing the teachers who were present on the occasion, he said, “During communal outbreaks, those who are involved in the clashes do not listen to the police or the politicians, but they will certainly listen to their teachers who taught them”.

He also revealed that there are 6 lakhs vacancies for the post of teachers in the state.

The MLA, J R Lobo in his presidential address said that, India cannot not be developed all alone with agriculture. “Human resource is another important factor. For this, education is a must and the teachers have to play a major role in this”, he added.

MP, Nalin Kumar Kateel, said, “Our country has a tradition of respecting teachers the most. To build a great nation, the contribution of teachers is a must; it is not possible by politicians alone. The present education system was introduced by Lord Macaulay. But the system has become commercial today and this has to stop”.

Mayor of Mangalore City Corporation Mahabala Maarla said that, “Today we hear a lot of wrongdoings committed by teachers. This should not happen”.

Nearly 53 retired teachers were felicitated on this occasion.

Raghav D, retired teacher and Herald M Monteiro, retired headmaster of Milagres School spoke on this occasion. Raghav said, “We were only three teachers in the school and we had to manage first to seventh grades daily. Such problem exists even today”.

Yakshagana performance and other cultural programmes were witnessed about an hour. Certificates were distributed to schools which secured cent percent results in the SSLC exams.