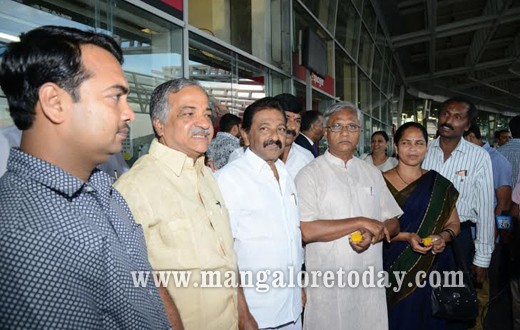 Mangalore, Oct 27, 2014: The resumption of the Mangalore Kuwait Air India Express flights on October 27, has been a great relief to Non-Resident Indians and frequent travellers on the route. The first flight took off from the Mangalore International Airport at 7.30 am with several leaders including Mangalore South MLA JR Lobo on board.

The direct flights on this sector has resumed almost after a year, thanks to constant and continuous efforts from Lobo and other leaders including Nalin Kumar Kateel, MP, Ivan D’Souza, MLC and State Minister Roshan Baig.

Speaking to media men before boarding the flight, MLA JR Lobo said he gathered that the main reason for the suspension of the flights on the sector was that it was not profitable. He at the same time said the matter was raised in the Assembly eight months ago and later the Air India Director was contacted in July this year to discuss the issue. The officer had assured to look into the demand, he said. Finally the meeting with Union Minister of State For Civil Aviation GM Siddeshwar yielded result, Lobo informed. He was also thankful to state minister Roshan Baig for joining the fight for the cause.

The Mangalore-Kuwait flight will operate thrice a week on Mondays, Wednesdays and Fridays. It will take off at 7.30 am from Mangalore and reach Kuwait at 11.15 am via Bahrain.

In its return journey the flight will depart from Kuwait at 12.15 noon(local time) and arrive in Mangalore at 19.25 hours(local time).