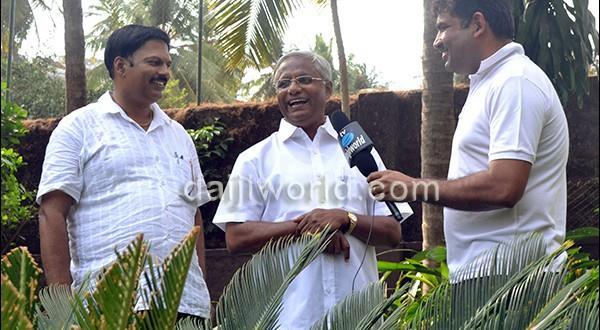 Image from Post Regarding Rebuilding the dented image of Mangalore my priority: J R Lobo

Mangalore, May 9: He may be new to politics, but his achievement is no beginner’s luck. In fact, J R Lobo’s victory against long-time BJP MLA Yogish Bhat is a proof of his popularity and good reputation that he earned as an able administrator. With a comfortable win by a margin of over 12,000 votes, Lobo managed to break BJP’s stronghold on Mangalore South constituency that had lasted for years together.

Soon after the election results were announced, Daijiworld met the newly-elected MLA for an exclusive interview at his residence. J R Lobo, visibly relaxed and excited at the same time, said that bringing about stable law and order, developing infrastructure and tourism, and providing job opportunities are some of his immediate plans for the city.

First of all, congratulations on your tremendous achievement. From bureaucrat to politician, and now an elected representative. How do you feel?

It was a thrilling experience. As a bureaucrat, I used to do only certain works which were supposed to be done. I was not supposed to cross the limits. Now as an MLA, the scope is very wide. Here we can think about formulating policy and projects. It is very interesting as I can be in the midst of the people.

You have achieved this feat in a very short period, in just about eight months after entering into politics, and you won by 12,300 votes. Is it a Congress victory or victory of J R Lobo?

I must say it is the victory of the Congress people and my well-wishers. Congress party workers have worked day and night. There was unity among the Congressmen and no groupism. I must mention M P Noronha here who gave up his office for a month and only concentrated on achieving this victory. Similarly, there were plenty of people who put their hearts and souls into this. And that is reason (we won). It was not my victory alone.

12,000 is not a small margin in Assembly win. Don’t you think people have voted beyond caste, creed and religion?

Definitely. This time the educated people have played a very important role, and they have forgotten the differences of caste, creed and religion. This time the fight was issue-based and not the normal election fight, and it was a very significant development.

Right from the day of nomination, the opposition accused you of not disclosing a criminal case, accused you of paid news, and then came the distribution of pamphlets against you. How did you come out of all this?

Sometimes, it gave me a lot of tension, but then I took them as natural in politics. Similar types of issues were also there in my bureaucratic life also. After all, bureacrats are similar to politicians as we are open to public. Therefore I could overcome all these tensions. All these things are cooked only to gain political ends. Of course, there may be external forces that motivated these people to cook up these things. But ultimately, we won, because at the same time god’s hand was also working.

Initially your own partymen said that Ronald Colaco was instrumental in getting the ticket for you. What is the role of Ronald Colaco in your political career?

He was one among the many well-wishers. There are many people who have played important roles. So Ronald Colaco, in the interest of the community, has really played a major, vital role in supporting me and motivating me. At the same time, there were a large number of people who supported me constantly without even coming to the front. There were people from all communities, not just one. The reason, as I told you earlier, was that it was an issue-based election. They did not agree with the way the BJP was functioning during the last five years. They needed a change and found some hope in my candidature.

What is your immediate plan for the development of this city?

All along, development has been my passion. It’s not a new thing to me, as I used to constantly think of projects and development works. There are two very important things for development to take place. One, a very stable law and order situation, as only then the capital will flow and investment come. So I need to first establish a very stable law and order situation. Earlier too I have made it very clear that I will not compromise on the issue of law and order, and whoever has committed a mistake will have to bear the punishment. Secondly, the development, in the sense, infrastructure in the city, new projects to be brought to the city, and tourism potential that has to be developed. All these things will definitely bring new capital to Mangalore.

The young generation expects a trouble-free environment in Mangalore…

True. There are two things are affecting the new generation in Mangalore. In the recent times, the BJP created an atmosphere of mistrust among communities as well as the young generation. If they came together for a social meet, they would doubt them, attack them… and that too in a very unfornate way in which they handled girls and ladies. Sane and civilized persons will not tolerate that. And this is what enraged the young generation against the BJP. We have to trust our youngsters, they are good and they follow the norms of our country and society. We have to give them space. That space was being denied to them.

Secondly, because of a standstill in the economic growth due to lack of investment in Mangalore or lack of projects or lack of development in Mangalore, the youth are running away from the city, either going abroad or to other cities. They are no satisfied with this place as they have no opportunities here. We need to create the right opportunities for the youth to stay back and enjoy this place.

You have a large number of supporters, not only here but also outside Mangalore and especially abroad. What is your message to all of them?

Mangalore is a very beautiful place. We need to create Brand Mangalore. In the recent past BJP has dented the brand image of Mangalore. It is very unfortunate. So we need to build the brand of Mangalore, for which I need the support of each and every person. The lost trust and confidence has to be brought back. That is my goal. If I can succeed in that, the development of Mangalore will be easier and I can dream of making Mangalore the second main city in Karnataka.

I am thankful to all the voters, as they have shown tremendous support to me. I thank my well-wishers who could not come to India to vote for me. I thank everybody who directly or indirectly supported me.