Home » Daijiworld » ‘Ranga Mandir to be accommodated at Bondel; work to begin soon’ 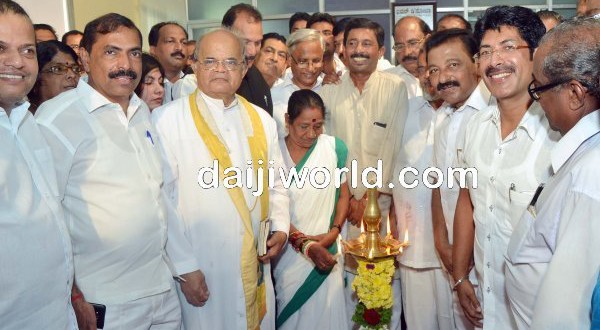 Image from Post Regarding 'Ranga Mandir to be accommodated at Bondel; work to begin soon'

‘Ranga Mandir to be accommodated at Bondel; work to begin soon’

Mangalore, Sep 6: Putting to rest all the confusions on finalizing the land for accommodating Ranga Mandir, a long pending demand of the Mangaloreans, MLC Ivan D’Souza told journalists that the cultural theater would come up in Bondel as decided when the foundation stone was laid few years ago.

Ivan D’souza was answering the queries of the press after he assumed his new office that was inaugurated on Saturday September 6 on the first floor of the city corporation. A website and facebook handle was also unveiled for the active participation of the people in policy making and to keep the citizens updated on the works he undertakes on a daily basis.

D’Souza said, “It is appalling, if we look back at the history of Ranga Mandir which has not yet materialized,” and added that he would not comment much on the past. When asked whether the structure would be completed within a year or two, he expressed that he might not comprehend that but the work to construct the building will be initiated within a short span of time.

However, the foundation stone for Ranga Mandir was laid at Bondel on August 23, 2010. For construction, the Kannada and culture department was allotted as many as 3.35 acres of land by the district administration. There was another proposal from the department of youth service and sports seeking allotment of land to carve out a cricket stadium in the same place.

“The move to establish Ranga Mandir at Bondel is in view of expanding the outer layer of the city,” he said. He also conformed to the press that the new location would be finalized to house the cricket stadium in the city.

Speaking on the new website he said, “This would consolidate my ideas as the website offers platforms for the citizens to send suggestions on issues dealt by the MLC. The website is designed for the active participation of people and to keep them updated with the new policies and projects.”

He expressed that the office provided by the state government in the premises of city corporation would facilitate him to meet people regularly and implement projects in the district with pace. During the opening ceremony of the office he thanked Mangalore south MLA J R Lobo, Mayor Mahabala Marla, ministers from the district and many well wishers.