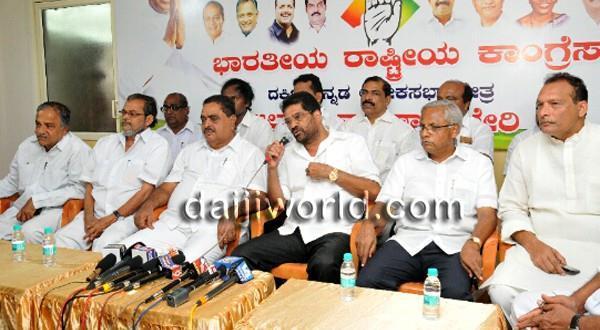 Mangalore, Mar 28: SCDCC Bank president Rajendra Kumar on Friday March 28 said that he has been appointed by the KPCC as the publicity head of the Congress campaign in Dakshina Kannada constituency.

Addressing a press meet here, he said, “When election results are announced on May 16, I am sure Janardhan Poojary will be enterting the parliament. There is lot of difference between the last elections and this time. Last time, the BJP that was ruling the state had committed a lot of mistakes, but this time CM Siddaramaiah being at the helm has been working hard to help the farmers. Congress has done a lot of good work in the last 10 months, exceeding all expectations,” he said.

“Many new projects have been initiated. On Shiradi Ghat patch work has been done and Rs 94 crore has been alloted to repair the stretch. Talks are on with a Japanese company regarding construction of a tunnel on the Shiradi Ghat,” he added.

“Congress has seven MLAs and and three ministers from Dakshina Kannnada district who have been working hard. It has therefore become easy to face the Lok Sabha elections,” he said.

Briefing further on the work done by the state government, Rajendra Kumar said, “The Brahmavar sugar factory in Udupi had become defunct and BJP was about to sell it to a Dubai-based company. But after Congress came to power, it released Rs 12 crore and paid all the pending dues to the workers. Rs 172 crore has been given to farmers.

“When Janardhan Poojary was the MP, he worked for the poor. He is a straightforward man,” he added.

Taking a jibe at BJP candidate Nalin Kumar Kateel, Ramanath Rai said, “If Nalin Kumar ever speaks in the parliament I will retire.”

He also informed that chief minister Siddaramaiah will be touring Beltangady and Sullia on April 2.