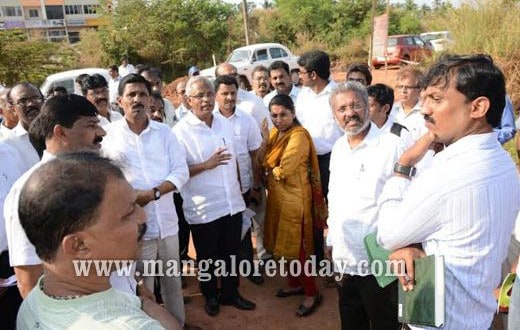 Mangaluru, Jan 07, 2015: Mangaluru South MLA JR Lobo has informed that the works of constructing a full-fledged bus terminus at Pumpwell would be initiated soon.

He was speaking to media persons on January 6, Tuesday after visiting the bus terminus site along with city Mayor Mahabala Maarla, MCC Commissioner Hephsiba Rani Korlapati, other officials and corporators.

The MLA said a total of 7.5 acre land has been acquired for the project so far and added the bus stand would come up on a 5.5 acre land which is considered ideal for the same. The plan is to have a four-storied terminus, he said adding every day 535 buses would enter this bus terminus which can accommodate 400 private buses and 125 KSRTC buses. Already two bids have been received, he said and informed that the bidders have been asked to submit estimated cost and feasibility report within 15 days.

Mayor Mahabala Maarla said it has been planned against acquiring 11.54 acre land adjacent to the already acquired land for the terminus. There is no need for fear by locals, he said adding the MCC meeting will have to now pass a resolution regarding the dropping of the 11.54 acre land acquisition plan.

MCC Commissioner said the officials have visited the spot as per the decision taken at a recent meet chaired by District in-charge Minister.