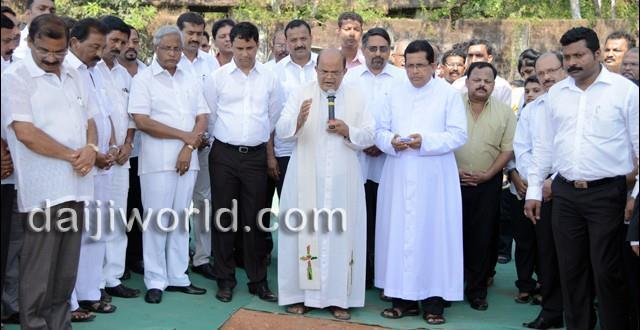 Mangalore, Mar 18: The foundation stone laying ceremony of ‘Primero’, the 20th project of Property Infra Tech India Pvt Ltd, Rohan Corporation, on the 20th year since the inception of the firm, was held near Advaith JCB, Padil here on Tuesday, March 18.

Blessing the occasion, Fr Santosh Kamath said, “‘Primero’ mean ‘First’ and this project is one of the first of its kind in the surroundings and on the NH 75 stretch in Mangalore city limits.”

Addressing the gathering, J R Lobo said, “Rohan Monteiro always thinks twice when going ahead with the construction of his projects. He has also played a very important role in giving basic necessities to the people of the city. He has won the trust of his clients through time bound service, quality management and cost effectiveness, and thus has become a successful builder in the city.”

Rendering his best wishes to the project, Mahabala Maarla urged builders to join hands with the MCC in the beautification of the city.

Mathew of Rohan Corporation proposed the vote of thanks. Saheel Zaheer of Platform Productions event management compered and organized the event.

This is the 20th year since Rohan Monteiro forayed into the real estate business, and ‘Primero’ is the 20th project of his firm. The ‘Primero’ is packed with all the latest and high class modern amenities with 88 homes of 2 and 3 BHK with ground plus 11 floors with one exclusive commercial zone.