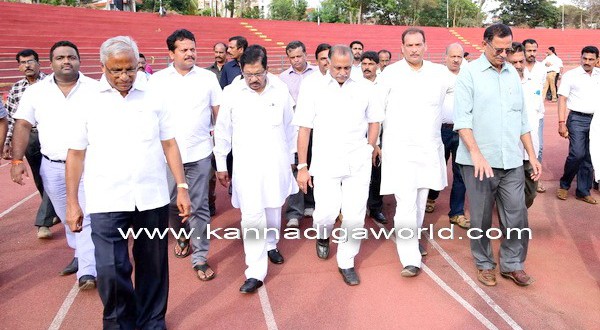 The national-level Athletics Federation Cup-2015 is scheduled to be held from May 1st to 4thin Mangaluru.

Addressing the media, he informed that the Chief Minister will inaugurate the Federation Cup on April 30th. On the first day only formal function and cultural events will be held. From second day onwards, the sports events will be held, he said.

As many as 700 athletes have already applied to take part in the event and 200 officials from all over the country will attend the event. Temporary floodlights will be installed as the events will go up till night. He has urged the sponsors to come forward and generously contribute to the event.

A meeting was held at the DC’s office in the evening to discuss on the preparations regarding Athletics Federation Cup-2015.

He also said that the Karavali ground where the sports meet will be held has been upgraded to accommodate 200 metre track for practice.

Deputy Commisioner A B Ibrahim said that track for jogging for the general public will also be laid.

Minister Abhaychandra Jain also added that nearly Rs 2 crore is being spent on the event. We have asked for Rs 1.7 crore from the government and Rs 20 lakhs from MCC. This will include Rs 50 lakhs for equipment and materials and Rs 20 lakhs to meet other costs like accommodation, food etc.

Officials informed that a medical room, rest area for athletes, cabin for press persons and photographers, and an equipment store will also be housed in the venue.