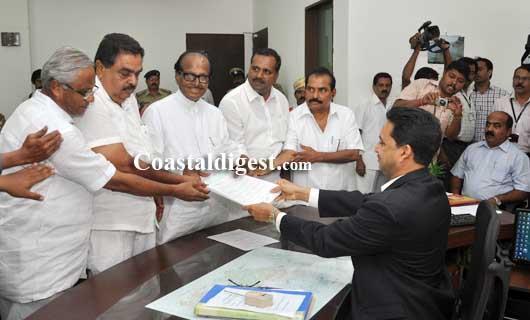 Image from Post Regarding Poojary files nomination, says it’s a straight fight between Cong and BJP in DK

March 26, Wednesday, was the last day for candidates to file their nomination papers in different constituencies in the state.

Speaking to mediapersons after filing his nomination papers, the veteran leader said that it was a straight fight between Congress and BJP in Dakshina Kannada constituency and other parties were not included in the race. Campaigning for the party has already begun, and the party workers are filled with great amount of zeal this time. The party leaders are putting in efforts for campaigning as if they themselves are contesting in the elections, he said.

He said that the party’s fight was with BJP candidate Narendra Modi in the Lok Sabha elections. Across the country, the BJP has been pleading for votes in the name of Modi, and not in the name of the party or its local candidates. This is a humiliation for the BJP, which does not have the confidence to campaign on its own, he said.

Before arriving at the DC office to file his nomination, Mr Poojary visited the Ullal Dargah, Kudroli Gokarnanatheswara temple and Milagres church to seek blessings.