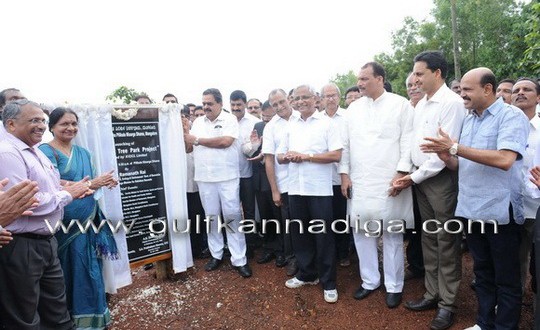 Pilikula: Urban eco-park and auditorium to come up

Mangalore, Aug 05: An urban eco-park is being developed at Dr. Shivaram Karanth Pilikula Nisargadhama, for the purpose of creating awareness among people about various environmental issues, this will comprise of a wide variety of trees and vegetation to enhance the green cover.

Speaking at the launching of Kudremukh Tree Park Project at Dr Shivaram Karanth Pilikula Nisargadhama on the outskirts of city on August 04, District-in Charge Minister B Ramanath Rai said, “Government has sanctioned Rs 5 crore for developing an urban eco park at Pilikula through Karnataka State Pollution Control Board (KSPCB).”

Briefing about the project, an official from KSPCB said that urban tree park is a broad concept, where apart from planting saplings, demonstrations and exhibition of models on solid waste management, recycling, sewage treatment and water conservation will be made to create awareness among the visitors. Rare and endangered plant species will be grown in an arboretum inside the park.

In additional, the project comprises of constructing a 100 seat auditorium which could be used for organising workshops and programmes on environment conservation, the official said.

For the purpose of boosting greenery in the city, a tree park will come up in a sprawling 15 acre land at Dr Shivaram Karanth Pilikula Nisargadhama. The project is funded by Kuduremukh Iron Ore Company Ltd (KIOCL) under its CSR initiative. The project is likely to be completed within three years.

The KIOCL has sanctioned Rs 52 lakh for the project and it has been planned to grow 7,500 trees belonging to 50 rare and endangered species of Western Ghats. In the first phase 2,500 saplings will be planted.  Some of the tree species to be grown are wild jack, rosewood, dhoop, nutmeg, wild nutmeg, Indian laurel, jamun and so on.