Home » Hindu » Pilikula sets its eyes on the stars 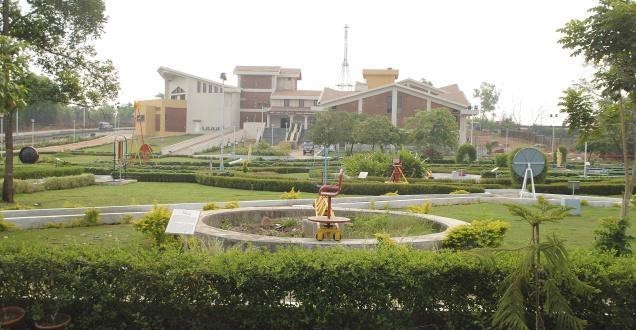 Image from Post Regarding Pilikula sets its eyes on the stars

Pilikula sets its eyes on the stars

Regional Science Centre at Pilikula, where the planetarium is coming up, has a few hurdles of its own. Photo: H.S. Manjunath

The Hindu Regional Science Centre at Pilikula, where the planetarium is coming up, has a few hurdles of its own. Photo: H.S. Manjunath

After years of talk, work on the 3D planetarium was set in motion at Dr. K. Shivaram Karanth Biological Park at Pilikula here on Thursday.

Though the foundation stone was laid nearly a year ago, the actual ground-breaking ceremony to symbolise the start of construction for the Rs. 24.5-crore project was done by MLA J.R. Lobo, formerly the Executive Director of the park. The entire planetarium, including an 18-m-diametre dome for the screening of the night skies, is scheduled to be completed within 18 months.

The ‘Swami Vivekananda Planetarium’ will include a sky theatre, astronomy exhibit, among others. Conceived more than three years ago, the planetarium will be only the second in the State. “Children and the public are fascinated by space and astronomy, and this will be educational and motivational for them… It will also work in dispelling superstitions around astrology,” said K.V. Rao, Director of the park.

Mr. Lobo said the project is the fruit of a three-year struggle, and recalled the contributions of former MLA N. Yogish Bhat, who ensured the ambitious project was accorded funds by the State government.

He called the construction of the dome a “technically challenging” job, but urged the contractor, Roy Constructions, to complete it within a year so that the process of importing equipment can be started within six months.

The planetarium comes up in the Regional Science Centre that is yet to clear out a few hurdles of its own.

Though complete, the Rs. 11-crore project, designed by the National Council of Science Museums, ran into trouble after moisture retention damaged a few exhibits and displays at the museum. “The work is in progress now, and will be inaugurated as soon as the Chief Minister gives a date,” said Mr. Lobo.

Giving details of the master plan of the 370-acre park, officials and representatives expressed the hope that once its proposals are approved, it would be catapulted into the tourist and educational map for the State. Mr. Lobo said a Rs. 8-crore aquarium, geological museum, urban eco-park, Western Ghat Botanical garden, and a museum that catalogues the history of the coastal region were in the pipeline. Short-term goals would include Rs. 2 crore for improvements in the zoo, and Rs. 4 crore to improve roads and the entry into the park. “We are seeing footfalls of about 5 lakh people yearly, and we expect this to dramatically increase,” said Mr. Rao.

Apart from Pilikula Nisargadhama, the suspension bridge at Thannirbavi was meant to be a landmark tourism project for the city.

However, MLA J.R. Lobo rued that bad financial planning – that is, starting off the project when only Rs. 1 crore was released out of the required Rs. 12 crore — and cost escalation to Rs. 15 crore had stalled the project. Moreover, he said, both the Public Works Department and the Tourism Department have washed their hands off the project.

“The plans are between these two departments. We’re still optimistic, but we don’t know how far we’ll be successful,” said the MLA.