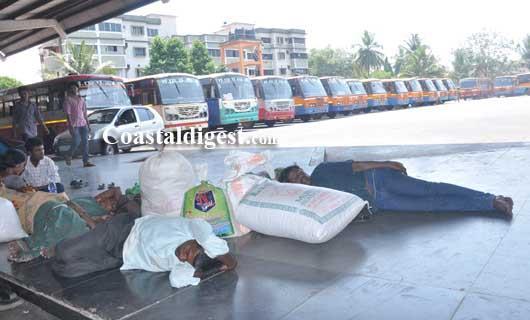 Mangalore, Mar 3: The self-declared bandh against the implementation of Yettinahole project by the state government was largely peaceful in Mangalore city, with the exception of a couple of protests in front of the deputy commissioner’s office on Monday.

Barring hospitals, medical stores and a rare few establishments, the entire city came to a standstill on Monday in support of the call for bandh for the cause of saving the Nethravati river. Traffic on the roads was minimal and the city wore a deserted look till noon. Even commercial establishments and malls remained closed till 6 p.m.

Bus and auto-rickshaw services were stalled from dawn to dusk due to the bandh, although railway services were functioning normally.

Due to the disruption of bus services, a horde of passengers were left stranded in KSRTC bus stand in the city, who were unaware of the bandh declared on Monday.

People such as Rekha, her brother and 5-year-old Akshatha who had arrived from Gadag, were stuck in the KSRTC bus stand since early morning as they were unable to travel to Kalladka in Bantwal taluk.

Relating her plight to a couple of reporters, she said that all the three had been waiting in the bus stand since 7 a.m. for the bus services to resume so that they could join her parents in Kalladka. “Luckily, we were able to have breakfast in the morning as soon as we arrived. But for now, we are stuck in the bus stand without any food. The auto-rickshaw drivers asked for Rs 1,000 to take us to our home near Kalladka. The only option is to wait till the evening for the buses to start running,” she said.

Bus drivers, who were also at the bus stand, told reporters that the government bus owners had decided to stop the bus services from 6 a.m. in view of the bandh to avoid untoward incidents. “It is safer for the passengers not to run the buses. We may resume our daily routes after seeing the situation at 5 p.m.,” he said, adding that upto 580 buses were scheduled from the Mangalore bus depot each day.

Around the same time, local MLA J R Lobo arrived at the spot, and distributed lunch to the stranded passengers at the bus stand. Around 350 to 400 people from outside Mangalore city were provided with free lunch sponsored by the MLA.

Speaking to mediapersons, Mr Lobo said that the self-declared bandh was met with a good response from the citizens of Dakshina Kannada. “Though largely peaceful, the whole-hearted support to the bandh reveals the opinion of the people who are opposed to the Nethravati diversion project. A study has to be conducted before deciding to implement the project; I will therefore communicate this to the chief minister and ask him to reconsider his decision on the project,” he said.