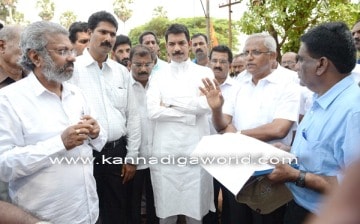 Mangaluru, May 4: The Padil-Bajal underbridge, construction works is facing problems due to flooding of drains which run parallel to the road passing through the underbridge.

MP Nalin Kumar Kateel, along with MLA J R Lobo and others inspected the spot on Monday May 4th.

Dharmaraj from Infrastructure Development Foundation said the main problem of flooding is due to the drains running in parallel to the underpass and which carries water through out the year. He insisted that the level of the water be raised by one meter so that the problem can be fixed.

Nalin Kumar Kateel after the inspection said, we came here as there were some technical problems in this project. A pipeline over here needs to be shifted and the MLA has asked the officials to do it soon.

He further said, by the end of this month; the Padil underbridge, Baikampady and BC Road over-bridges works will be finished. By November 2016, Thokkottu and Pumpwell flyovers will be completed.

There is a technical issue with Pumpwell flyover for land acquisition and I have asked the MLA to do the needful, and the work will be started shortly.

J R Lobo said, we have inspected this underbridge and asked the railway officials to look into the problem. A meeting with MP and the officials will be taken up on this matter. The stretch which connects Bajal from the other side is already concretized and I have directed the concerned officials to finish the work on the other portion by this month end. UGD (underground drainage) connection can be given and it is ready now, he said.