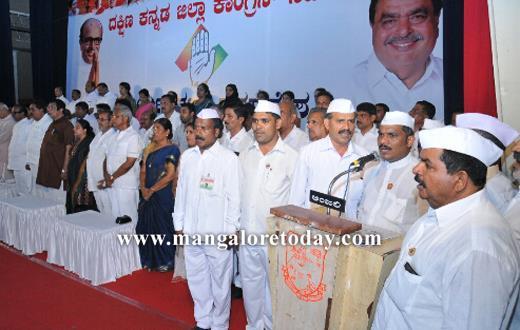 Mangalore, March 24, 2014: Union Minister Oscar Fernandes was all praise for the party’s candidate from Dakshina Kannada Lok Sabha constituency B Janardhana Poojary and said decades ago, it was Poojary who helped the late prime minister Indira Gandhi make a political comeback with a victory from Chikmagalur constituency.

Oscar was speaking after inaugurating a party workers’ convention held at Town Hall in the city on March 24, Monday after the inaugural of the party’s election office at Exotica Building at Balmatta. He further said Poojary was a leader who has always stood for the cause of the party workers and called upon the party members to strive for the victory of Poojary.

He also said Poojary, Union Minister Veerappa Moily and late Blasius D’Souza were instrumental in strengthening the Congress party in the region.

Oscar further said the Congress government was striving hard for social justice and empowerment of women.

DK District in-charge Minister Ramanatha Rai in his address also enlisted the achievements of Poojary and urged party workers to ensure his win. He questioned the contributions of BJP’s Nalin Kumar Kateel to the district and said his contribution was a zero and questioned why leaders like him should be elected to the Parliament.

Janardhana Poojary who also spoke, exhorted the party men to sensitize the people on the contributions of the Congress and the failures of the BJP.

He said the BJP was seeking votes in the name of Modi and not in the name of its candidate Nalin Kumar or BJP and therefore he considered Modi as his opponent and wanted him to contest from Dakshina Kannada.

M D Aslam from JD(S), retired DCP Dharmaiah, Mariamma Thomas from KJP, Dinaker Shetty from All College Students Union and others joined the Congress on the occasion.