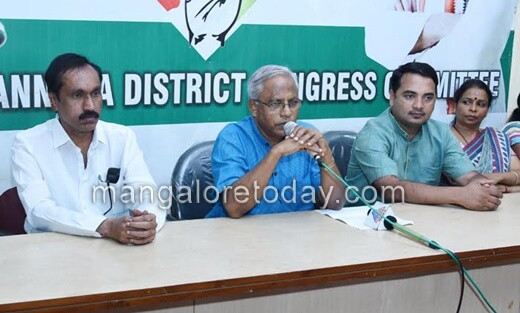 Mangaluru Oct 12, 2016: MLA JR Lobo has said that the upgradation of old port need to be prioritized in order to resolve the long standing problems at the port.

Addressing the Press at Congress office on October 12, Wednesday he said that Mangaluru city has a vast history.Keeping the Smart City project in mind, development of old port and fishing is a vital necessity as myriad people are dependent on business activities at the port.

Even after the old port is opened for the arrival of ships so far not a single ship has arrived due to lowered depth of water up to 1.9 meters, he said.

He further stated that several development works have been initiated including the third phase of port extension at a cost of Rs 65 crores. Though the project cost has been revised and put at Rs 90 crores so far Rs 55 crores has only been provided. The Centre’s share is yet to be provided and this has led to a delay in third phase of work, he said.

NABARD has sanctioned Rs 5 crores for the construction of dedicated berth for Lakshadweep vessels at the old port at Bunder. The authorities have been pressurised to expedite the works, Lobo added.

A permanent shed will be constructed for fisherwomen for selling fish at Bengre at a cost of Rs 47 lakhs and at the same time State Bank fish market also need to be upgraded, said JR Lobo.