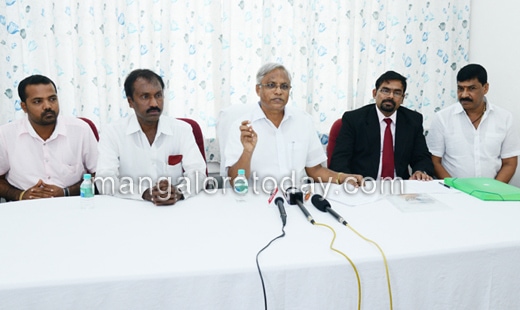 Mangalore, Sep 7, 2014: Addressing the press September 6,  MLA J R Lobo informed that the State government should set up NRI Forum cell in Mangalore, to cater to the needs of the NRIs in Dakshina Kannada, Udupi and Uttara Kannada districts, as there are a large number of NRIs in this region.He said that the NRIs face lot of problems here at home. There is no link to liaison  between them and the government.

Kerala, has a well orchastrated centre to cater to the needs of their NRIs in Thiruvananthapuram. The NRI Forum in Bangalore should be strengthened too. The cell in Mangalore would work as a coordinating body between the NRIs  and the government. The Cell should solve the problems faced by the NRIs in passport office, collecting documents for the passport and also problems pertaining to invest in their home town. Many of the NRIs are ready to invest in business in Mangalore, he said.

However, there is no mechanism to guide and co-ordinate with them on problems. As such the NRIs and the nation stand to loose. Often. persons working in lower categories with a meagre salary in GCC countries,  encounter problems, they are not equipped to tackle the problems, the Cell could work as a bridge between the families and the Indian Embassy. Also such liaison can assist people of Karnataka in overseas countries in case of emergencies.

MLA Lobo said, “I have recently met NRI Forum Vice President Prakash in Bangalore and requested him to convene a meeting of the NRIs in Mangalore to address their problems. The NRI Forum has also been suggested to study functioning of the cell in Kerala. At present, the NRI Forum has been aiming at increasing the investment. Along with inviting investments in Karnataka, there is a need to solve the problems faced by the NRIs,” he said.

NRIs and CET:  The MLA said that NRI students inspite of possessing merit are not allowed to write CET to enter into professional courses like engineering and medical in Karnataka. The same is not the case in Kerala and Maharashtra. The students are allowed to write CET provided their parents hail from the State. In Karnataka, domicile certificate is mandatory for the NRI students. As a result, they have to study atleast two years in the State to write CET.  In the abcense of  CET, they have to pay capitation fee to enrol their names in the engineering and medical colleges to pursue their studies. “Office bearers of Karnataka NRI Forum, Jeddah, and myself had met Minister for Higher Education R V Deshpande and highlighted problems faced by the NRI students. The Minister in turn has responded positively. Iwill raise the issue in the winter session of the Assembly,” he said. It is indeed appreciable that M’lore MLA has shown special interest in NRI matters.