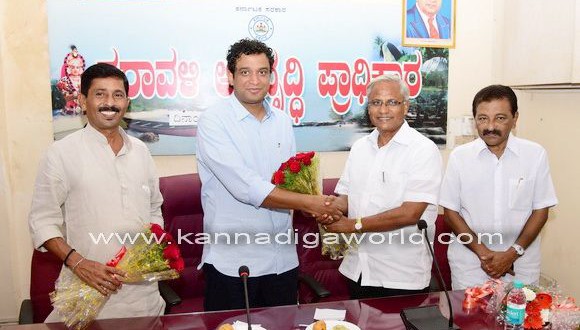 Mangaluru, Nov. 27: Nivedith Alva, who was earlier a KPCC secretary, assumed charged as chairman of Coastal Development Authority (CDA) at the CDA office here on Thursday November 27. Nivedith Alva is the son of veteran politician Margaret Alva. Addressing the media after taking charge, Nivedith Alva said, Thestate government and the Congress party have provided this opportunity to me. Basically I am from Uttara Kannada. Now I have got opportunity to work here.

I have newly taken charge of this authority. We will proceeed after holding discussions with the deputy commissioner and the officers on the developmental activities and scope. He also said that he has already contacted all the ministers from the coastal districts regarding his new responsibility.Speaking on his background he said, I was into the field of television production and contributed various programmes to television channels. I also worked for the party. Considering my educational qualification and work, the Congress party has provided me this with opportunity.

He further said, Youth want things to be done fast, we need to be proactive. The state government is willing to develop 44 beaches from Mangaluru to Uttara Kannada, and has also written to the union government to relax CRZ norms. This will boost the tourism potential.Further speaking on the budget for the Coastal Development Authority, he said that he would first completely study about his department, and then approach the CM as a delegation with the support of ministers from the coastal districts.Aiming to reach people through social media, he said The CDA website will be updated, and we will also make use of social media which will help us to get proper feedback.MLA J R Lobo congratuled and welcomed the newly-appointed chairman. Mayor Mahabala Maarla, Suresh Ballal, Denis D’Silva and others were present on this occasion.