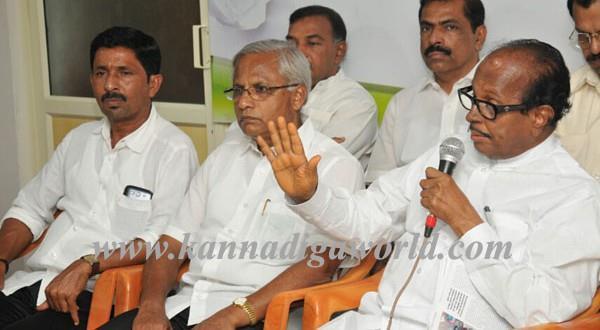 Modi is adopting a dictatorial policy: B Janardhana Poojary

Mangalore, April 1: Congress candidate from Dakshina Kannada Lok Sabha constituency, B Janardhana Poojary said that he will fight for the justice of poor at any cost.

Speaking at the press meet held at Party’s Election Office on April 1, Tuesday, he said that BJP has filed complaint against him for speaking in favour of the poor and promising not to increase the Assessment Property Tax.

Poojary said that he will not fear for the complaint filed by the opposition party and will work for the beetrement of poor in future too.

BJP PM candidate Narendra Modi was only a bundle of lies and has not worked for any development in Gujarat.

BJP has no respect for seniors like LK Advani and Sushma Swaraj and the part leaders themselves agree that Modi is adopting a dictatorial policy. Hence people will befitting reply this election.