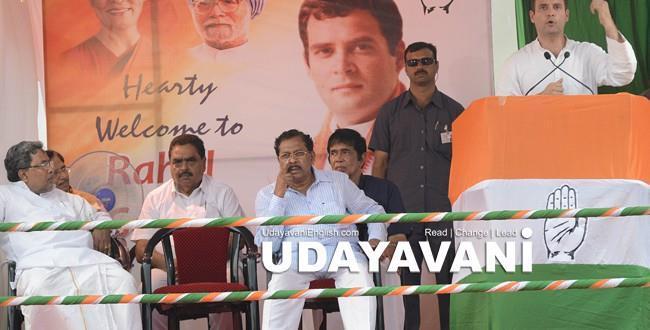 Mangalore : ‘Congress ek party nahi ,ek soch hain’ said Rahul Gandhi lashing out at BJP which maintains that Congress as a party will be wiped out from the country addressing the massive Congress rally at Nehru Maidan, Mangalore on Friday,April 4.

Espousing the cause of women, he said Congress has reserved 50 per cent seats for them in local bodies and was committed to providing 33 per cent reservation in state legislatures and Lok Sabha.

Underscoring Congress’ resolve to root out corruption, Gandhi said despite opposition’s resistance, the UPA government has passed Lokpal Bill and stressed the party’s commitment to pass the five remaining anti-graft legislations which remain stalled in Parliament.

Congress party is a thought

“Congress party is not a party but it is a thought. We believe in fostering unity and brotherhood among the people. In the past ten years India has developed immensely. The roads built during our tenure was three times more than during the BJP rule. Numerous educational universities were set up under Congress rule.” Gandhi said.

M’lore will develop in the lines of B’lore

“Just like Bangalore is world famous, in forthcoming days Mangalore too will develop on those lines. Informationa Technology, Bio Technology should be strengthened. This can be done easily as there are many capable young people in the city who can bring about this development. In future Bangalore and Mangalore should be the two cities which will become world famous and that other nations like USA, UK will talk about these cities.”he added.

“Karnataka has treaded into path of success due to various policies formulated by the Congress led State Government. Now Karnataka is world famous due to Congress rule.”Gandhi said.

“We are about to change the education system. We want to create revolution in the academic field by seeing to it that children of people belonging to the poor family will get education. We will ensure that every child will be educated,” Gandhi asserted.

A massive crowd joined the Congress campaign rally to be addressed by Rahul Gandhi , Vice president , AICC. The rally began from Rosario church via Rao and Rao circle and then entered Nehru Maidan.

Congress has given what people want: Congress chief G Parameshwara

Rahul Gandhi has specifically come to campaign for the MP candidate Janardhan Poojary. He is a young and dynamic leader. The party has always strived for the betterment of the poor and also contributed much to the society. The party has created Green revolution and offered a living to the common man. The number of the educated in the country has risen to 78%. The Congress regime has contributed to the mobile revolution.

Congress has pledged to give a good life to the people and it has always lived up to what it has said.

BJP criticizes that Congress is corrupt. Narendra Modi speaks about 2G scam, speaks of corruption but he never speaks of Katta Subramnya Naidu, Yeddurappa or the man responsible for Rs14, 000 crore scam Ananth Kumar who are within the party. BJP speaks of hindutva and respect for women but what has it done the lady corporator who went to seek votes, he questioned.

Congress needs to be in power not only in the state but also at the centre for the development of the country. The Congress led state government has seen many development measures. The most important of that is the implementation of the Rs 1 per kg rice scheme (Annabhagya Scheme), wherein every Below Poverty Line family having more than two members would get 30 kg rice per month.

Another achievement was the implementation of a loan waiver for backward classes. The two schemes cost the state exchequer over Rs 5,500 crore. The State government has had implemented several programmes like loan waiver for backward classes, doubling of farm loan limit to Rs 2 lakh at 0% interest, Constitution of Agricultural Prices Commission,Rs 10,000-crore expenditure plan on irrigation, construction of 300,000 houses for the poor and many more.

“Bharatiya Janata Party (BJP) have got into the election band wagon by declaring Narendra Modi as their prime ministerial candidate. They have neglected many several leaders like Advani, Jaswanth Singh, Yashwanth Sinha. They have declared him as the candidate as Modi is an hardcore RSS. If he becomes the PM, as they know that a hardcore RSS man can build a communal nation. As the party has always stood for communalism.”said Siddaramaiah, chief minister, Karnataka.

“The citizens will not accept a communal Prime Minister. The BJP is harping about Modi Wave engulfing the nation. We have seen during campaigning there is no Modi Wave anywhere. Take Mangalore for example if Modi Wave had swept here such mammoth crowd wouldn’t be here.” he mocked.

The Chief Minister said with the objective of ensuring good prices for agriculture produces, his government procured foodgrains at minimum support prices (MSP) as soon as the harvesting season commenced this year.So far, foodgrains worth Rs. 1,900 crore have been purchased at MSP in the State. The State government is providing interest-free loans up to Rs. 3 lakh for farmers and has enhanced the incentive for milk producers from Rs. 2 to Rs. 4 a litre, he said.

It is the UPA government that has given development and the people know about it.

“Cultured people will know whom to vote. BJP has ministers like Palemar, Halappa, Lakshman Savadi, C.C.Patil, Sri Ramalu and Raghupathi Bhat who through their behavior have put the party in shame. While some ministers were watching blue film in the parliament another person was accused of killing his own wife. When such is the case responsible citizens will know it better whom to vote for.” said Siddaramaiah.