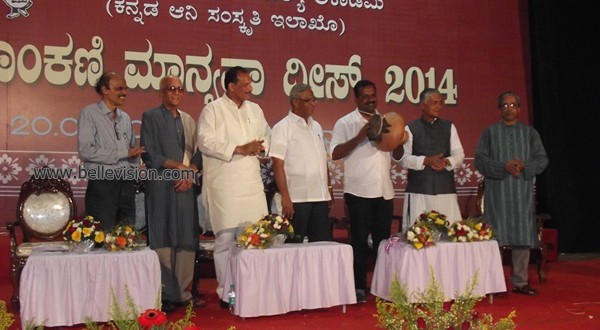 M’lore: Unification of All the 41 Konkani speaking groups mark the ‘Konkani Manyata Divas’

Mangalore, 21 Aug 2014:The Konkani Manyata Divas organized to celebrate the 22nd anniversary of addition of Konkani as the National Language in the eighth schedule of the constitution was able to unify all the 41 konkani speaking groups of the state from the Three Major Raligions today.
The Health Minsister of Karnataka UT Khader inaugurated the program by beating the traditional musical instrument of Kokani speaking people ‘Gumat’ in the town hall of the city.

He in his inaugural address  Khader appreciated the contribution of the Konkani speaking people to the region. He said “The Konkani speaking people have not only been a reason for the development of the Coastal districts of Karnataka but also made everyone proud by their rich culture. It may be the tile factories or the Hospitals. Their contribution for the development of this region is appreciable.”

“One needs to give importance to the linguistics in  the curriculum. Its the language which helps a person mingle in the society. Since this land is the land of many languages we should put an effort to learn the languages of other religions to know their culture.”

The president of Karnataka Konkani Sahitya Academy Roy Castelino pronounced the uniqueness of Konakni language in his inaugural address. He said “Konkani is the mother tongue of people of 41 groups of all three major religions of the state. It is the only language to have 5 different scripts and above all it marks ‘Unity in Diversity’, the uniqueness of India.”
Later the an associate professor of university college Dr. Jayavanth Nayak rendered a lecture on Addition of Konkani in the eighth schedule of the constitution.

MLC Ivan Dsouza who spoke on the occasion said “The activities of the Karnataka Konkani Sahitya Academy have considerably  increased and hence forth there is a need to increase the governments grant to the academy. Along with this, facilities and allowances allotted for the president and the members should be improvised for their tireless efforts in organizing these activities”

He later on promised to address the Legislative council of Karnataka  in Konkani in the next session of the council.
MLA of Mangalore South constituency JR Lobo in his presidential address said, “For the success of any organization the dedication of the members will be the key factor. Even though there are many organizations, the ones of Thulu and Konkani are the only ones to organize more activities”

“We have the responsibility to inherit the rich Konkani culture to the next generation”’ he added.
A book named ‘Konkani Kastoori’ authored by Steven Quadras was released at the occasion.30 Organizations which rendered their service to the Konknai language were honoured by the organizers.
In the prize distribution ceremony held to honor the winners of the Cultural competitions in which The team of Rosario college bagged the first prize in College category while Group Aata bagged the first prize in the association category.
Fellowships worth one Lakh were distributed to three scholars of Konkani who submitted the thesis on selected subjects in Konkani.

Former presidents of the Karnataka Konkani Sahitya Academy Eric Ozario and Basti Vaman Shenoy, Registrar of the academy Devdas Pai, President of the Konkani Prachar Sanchalan Stany Alvares were present at the occasion.
In prior to the formal ceremony eight cultural teams of Konkani from eight directions of the city mat at Hampankatta circle and marched towards the town hall.