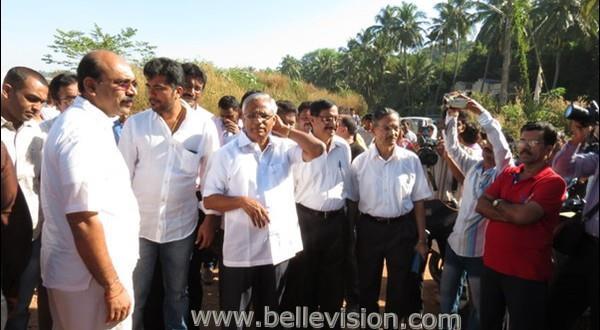 MLA Lobo assured the residents a proper plan will be chalked out by January 2014 in order to resolve the issue once for all.

MLA Lobo also accepted a memorandum and listened to grievances of the locals who gathered on the spot in large numbers, as it was a major issue affecting nearly 1,700 household families.

The earlier civic body had proposed a plan to construct a centralized bus terminus besides NH from Mahaveer roundabout – Pumpwell and Nantoor roundabout about 4 to 5 years ago. The total land planned to be acquired for this project was 11.5 acres of which nearly 7.5 acres have already been acquired.

There was a service road from NH that connected nearly 1,700 households of Ram Nagar, Vasant Nagar, Jayanagar, Maroli and other areas. Three years ago, when the Talapady to Suratkal stretch of NH four-laning work began, the service road connecting these localities was demolished by National Highway Authority of India (NHAI) and a temporary service road on the acquired land for the bus stand was laid.

Now, it is nearly one year since the temporary road is in deplored state, but neither NHAI nor civic body has tried to solve this issue. The administration has been not able to solve this issue as the road passes through the acquired bus stand project land and it is out of its limits.

The problem has reached a deadlock, where the road can neither be repaired, nor the bus stand constructed due to various reasons. The highway authorities have been turning deaf ears to these problems, say the locals.

Even the auto rickshaw drivers refuse to ply on these road and even if they do come, they demand more as the roads are in a pathetic condition, complain the locals.

Just near acquired bus stand property, adjacent to the major open drain, a 10 feet land for road has been sanctioned, but it would be better if another 10 feet is given and a 20 feet road is laid. The civic body has again proposed acquiring an extra 11.5 acres, says local corporator Keshava Maroli.

Taking serious note of this matter, J R Lobo, along with municipal commissioner Ajit Hegde, joint commissioner, inspectors of civic departments and other officials visited the spot, held discussions and assured the locals to find a permanent solution to the problems.