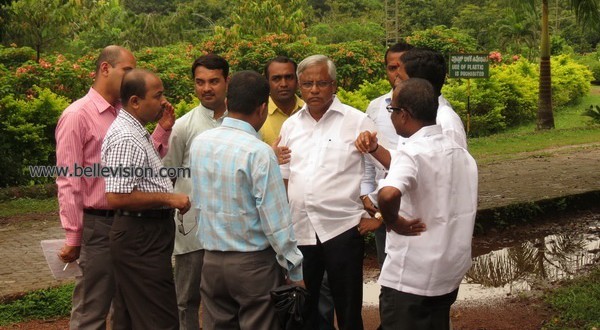 Mangalore, 28 Aug 2014: MLA J R Lobo here on Thursday August 28 instructed the horticulture department officials to clear wild vegetation, muck and garbage that ruined the beauty of Kadri Park here within one week’s time.
MLA Lobo accompanied by the mayor Mahabala Marla paid a visit to Kadri Park here on Thursday morning, in order to assess the situation at the park.

Addressing the media persons at the park, MLA Lobo said, ‘The park has not been maintained properly despite hundreds of people come to this park to leisurely time or to relax. I have instructed the horticulture department officials to clean the park within a week. I will also convene a meeting with the Deputy Commissioner in this regard,’ said MLA Lobo.
‘We have asked the state government to sanction Rs 1 crore for the development of the park and this year Rs 5 lac have been already released,’ said MLA Lobo.

MLA Lobo further said, ‘A proposal has been forwarded to state government to install water fountain at the park @ Rs 4 crore, out of which Rs 2 crore has been already sanctioned, added MLA Lobo.
The mayor Mahabala said, ‘As MLA Lobo said the condition of the park is really worse. This park was once the pride of city. A toy train that was the asset of civic body has been scrapped. The civic body does not have the file of that train and none knows where exactly is is now,’ said mayor Mahabala.
‘It is ill notion that any young couple who come to the park is presumed to have come with different intentions. The city police along with a lady police patrol the park and inspect the activities twice a day. The people should come to the park to avail the benefits,’ said mayor Mahabala.

The horticulture department staff was present on the occasion.