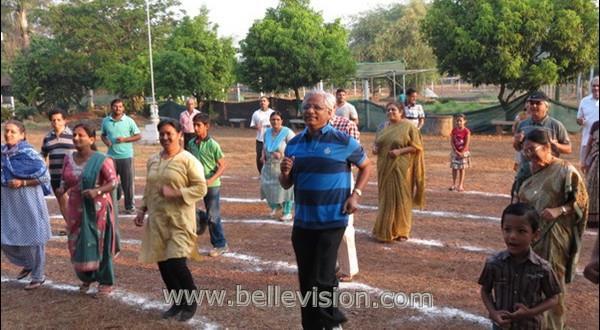 Mangalore, 22 Dec 2013: MLA J R Lobo inaugurated the newly-formed Bondel – Kadri Laughter Club at Kadri Park here on December 22, by unveiling the banner of the Club to the cheering of scores of participants in the first session.

Speaking on the occasion, MLA Lobo outlined the benefits laughter and smiling in terms of individual, collective and reciprocal happiness. He said that cities like Bangalore have several laughter clubs functioning in public grounds, parks and gardens. He welcomed the staring of such a Clun in Kadri Park and urged people visiting the Park to take advantage of this new facility.

MLA Lobo said that Indians are sunny people who easily smile, unlike the people of some other countries. He welcomed the initiative of the organizers of the new Club and hoped that a large number of people will take advantage of this new popular venue for physical exercise and relaxation to cope with the tensions of urban life.

The Club is being promoted and anchored by John B Monteiro, a noted author and journalist in English.

Conducting the function, Mohan Monteiro, the anchor’s son, explained that his father has been in the laughter club mode for the past 50 years, first in Mumbai and then in Mangalore, with the launching of Bondel Laughter Club in 2002 – which still survives and is being merged with the new club. The Bondel-Kadri Laughter Club is to take advantage of the hundreds of footfallers in Kadri Park.

Mohan said that though the inaugural session was held at 7.30am on Sunday to catch the daylight, the daily sessions would start at 6.30am and would last 20 minutes.