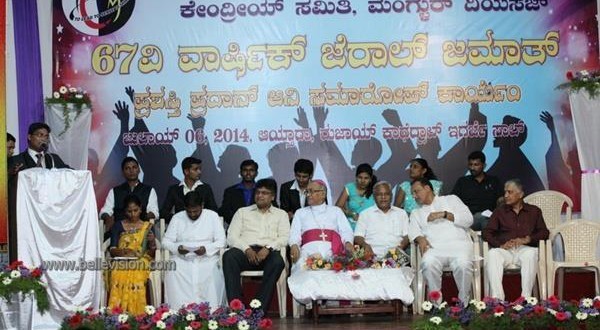 Mangalore, 13 July 2014 : Mangalore south MLA J R Lobo on Saturday July 12 said that improving the basic infrastructure in Mangalore and transforming it into a major port city of the country was his main aim.
Addressing a press meet at the Eden Club here, on Saturday afternoon, MLA J R Lobo said, ‘From over a year I have been working to make Mangalore a full-fledged port city and I will continue this work till the end of my tenure. There are five areas of development that we have to concentrate upon if this has to become a reality. They are – development of the old port, development of fisheries infrastructure, improving the basic infrastructure of the city, developing tourism, and development of IT and industries in the city,’ said MLA J R Lobo.

‘Fisheries is the unique selling point of this region. People outside the coastal region are interested in seeing the various stages of fishing and the auction of catch and related activities. We can attract more tourists if we develop the fish markets of the city and improve the basic fisheries infrastructure,’ said MLA J R Lobo.

‘We plan to construct an air conditioned fish market at Kankanady. All the major markets of the city will be upgraded. Some of them have already received approval from the government.

‘A meeting of fishing community leaders has been held with the chief minister followed by a meeting with the port development minister, the urban development minister and the fisheries minister. Many decisions to develop the infrastructure of the fishing port and other infrastructure of the old port have been taken,’ informed MLA J R Lobo.
Corniche project

‘A three-phase corniche project (ring road) has been planned. Jappinamogaru-Kuloor-Gurpur corniche road will enable smooth flow of traffic. It will change the whole landscape of Mangalore. Even though the project is time consuming, efforts will be made to finish the project within the stipulated time and for this everyone’s co-operation is required,’ said MLA J R Lobo.
Tourism development

A project called ’Coastal Circuit’ has been sanctioned to foster tourism in the district. The main agenda is to improve the beaches, and along with this, efforts will be made to complete the much anticipated Sultan Battery hanging bridge through the PWD department, said MLA J R Lobo.
New Planetarium to open by March 2015

MLA Lobo also said that Rs 12 crore has been sanctioned for a new planetarium in Mangalore and the work is in progress. This will be the first 3D planetarium of the district and by next March it will open for visitors.

He further said that along with all the developmental works, more IT companies and industries will be brought to the city. ‘For this we have work on the development of basic infrastructure which in turn will foster connections with the neighbouring districts and result in more trade and thereby more revenue,’ added MLA J R Lobo.

‘Efforts will be made to complete all the projects in my tenure. The state government is pro-development and will make efforts to implement all the above projects on-time,’ assured MLA J R Lobo.

Regarding the flow of drainage water on roads, MLA Lobo said, ‘Due to issues related to land, we were not able to set up an electric tower due to which the sewage treatment plant (STP) in Jappinamogaru has stopped functioning. I have spoken to the people concerned and soon the plant will start working. After this half of the drainage issues in the city will be solved,’ said MLA J R Lobo.

The mayor Mahabala Maarla, deputy mayor Kavitha Salian, former corporators Mariyamma Thomas and others were present at the press meet.