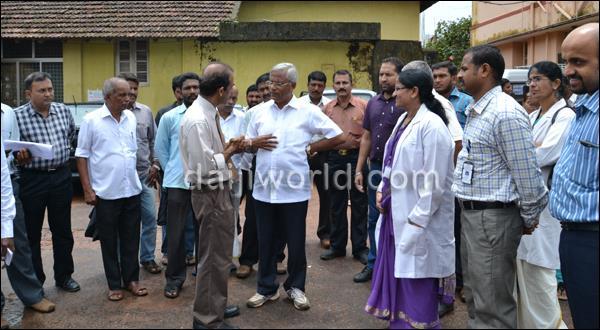 During his visit to the hospital, he was accompanied by Dr Shakunthala, medical officer, Dr Shantharam Baliga, nursing superintendents and other staffs. He visited all the departments and checked for any drawbacks and necessities that are to be established on a priority basis.

“Lady Goshen hospital has been giving the best care to its patients. As the old block has been demolished and the new block is under construction, there is a temporary shortage of space. Similar to Wenlock, there is shortage of staff. The kitchen, OT, labor rooms and ICU have been maintained well. No major complaints have been received. The hospital has been running well”, he said.

He visited the new construction site, spoke to the engineers, contractors and directed them regarding their work and urged them to complete the project on time.

He later visited the fish market at State Bank in the city; he spoke to the vendors selling fresh fish and dry fish and also discussed their problems. The major problems stated by them were the roof leakage, water crisis and waste management.

He then asked the JES, health officers and other officials to look into the problems and to do the needful immediately. He also checked for damaged properties that were lying unattended in the service bus stands, like chairs, roofs, pits etc. He also checked the public toilet nearby and urged the concerned department to get all the complaints cleared off at the earliest.

He was accompanied by T K Sudhir, Krithin Kumar, MCC health officers, officials and others.