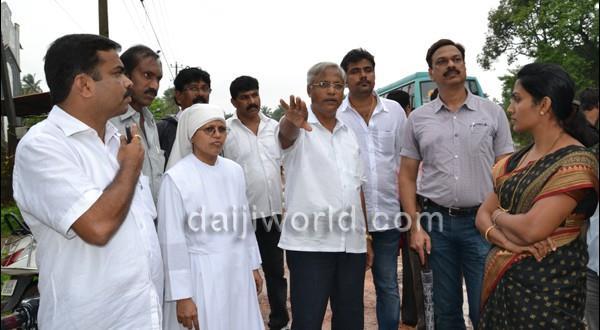 Mangalore, Jul 3: MLA J R Lobo and officials of the National Highway Authority on Wednesday July 3 visited various places along the national highway and inspected development and progress of the ongoing works.

Lobo first visited Pumpwell to have a look at the major drain that has been left untouched and unfinished. He then visited the land earmarked for the new bus bay. Issues related to the drain and roads dominated the discussion during his interaction with the people.

He also visited Bajjodi and the Little Sisters of the Poor orphanage and urged the officials to construct proper temporary drains for the smooth flow of rain water. He held discussions with the officials regarding traffic management at two major junctions, Nanthoor and KPT, and urged them to construct an underpass or an overbridge, whichever suited better.

He then visited Kulshekar Kaikamba and discussed with the higher officials the incomplete flyover at Kulshekar and urged them to complete the work at the earliest. He also noted the problems faced by the public due to the narrow road across the overbridge.

He later inspected the Kottara flyover and held discussions with the officials.

Speaking to the media, J R Lobo said he visited different places along the highway where the works were pending, especially with connection to the four-lane roads. “The major problem faced by the people is the lack of drainage facility. The higher officials of the NHAI have been directed to carry out proper drainage works wherever required,” he said.

“Due to financial crisis, works were delayed but they will be resumed and completed soon after the monsoon. There is a need for widening the service roads at a few places and to meet that need, proper steps will be taken. The main junctions, Nanthoor and KPT, need an underpass or an overbridge. This has been brought to the notice of the officials and other related bodies. Steps will be taken to ensure that it goes on well,” he said.