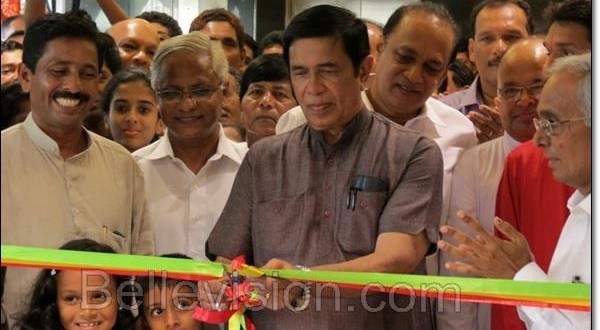 Mangalore, May 12, 2014 : The union minister Oscar Fernandes inaugurated Harsha, showroom of home appliances and retail outlet at Milagres Complex, here on Sunday May 11.  The tributes were paid to the departed soul of Harsha founder Bola Poojary.  Harsha is the unit of Udupi-based Prakash Retail Private Limited.

Harsha managing director Surya Prakash was present on the dais.

The minister Fernandes in his inaugural address said, ‘Harsha has brought happiness to my heart and to many others today. I shared a great bond with Bola Poojary, the founder of Harsha. The new showroom of Harsha has been inaugurated on the date 11, which is again special and unique,’ said Fernandes.

The minister Fernandes further said, ‘In my inaugural speech earlier, I had advised the directors of Harsha to not just focus on Mangalore and Bangalore, but also open showrooms in Delhi and other prime places, but today I would like to amend this statement and say that Harsha should have showrooms not only in India, but even in foreign countries. The main reason I am saying is the high standard they have maintained.

‘We always ask the foreign companies to set up their business outlets in our country but it is time firms like Harsha go abroad and start business. The secret behind Harsha’s success is its volume of sales and stocking techniques. Harsha does business with values and thus it has been successful to this extent and is still growing,’ said minister Fernandes.

Speaking on the occasion, Vinay Kumar Sorake said the special and salient feature of Harsha is that all the 11 showrooms have been inaugurated by Oscar Fernandes himself. ‘This showroom belongs to people and the people must use it in the best way possible. Even the staff of Harsha consider the firm as their own and thereby serve better. Let Harsha become the best of all in its business segment,’ emphasized minister Sorake.

The minister Ramanath in his presidential address said Harsha has been a household brand in the state, and the prime reason for this is the loyality and transparency it has followed and maintained in doing business. ‘Harsha has already started its business in major cities of our state; I wish that it extends to foreign countries and other parts of our country as well,’ said minister Ramanath.

Oscar Fernandes handed over the bill to its first customer Ashok Mendonca, who also happens to be the interior designer of the showroom.

MLA Lobo, Palaniswamy and Fr Valerian D’Souza also spoke on the occasion and rendered their best wishes to Harsha.